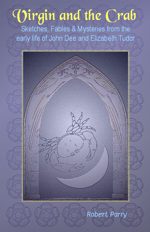 Virgin and the Crab: Sketches, Fables and Mysteries from the early life of John Dee and Elizabeth Tudor

So who is the Virgin and who is the Crab? Well, it probably comes as no surprise that the Virgin refers to Elizabeth, later to become Queen Elizabeth I. The Crab is a little less obvious – but it represents Elizabeth’s guide and confidante John Dee, a person perhaps not quite so well known. It is in a bid to rectify this sorry state of affairs that I first began to write my story.

The whole thing takes place during the turbulent decade of the 1550s – shortly after the demise of Henry VIII. The character of Elizabeth is therefore not as we generally think of her, as the accomplished ruler, but as a vulnerable young woman who more than once nearly loses her head and spends much of her time either imprisoned or under some form of house arrest. It is during this period that she faced some of her greatest challenges – challenges that she overcame largely as a result of a group of powerful and influential men and women who aided and supported her covertly – working from behind the scenes. That is my contention, anyway – and it is here that the hero of my story comes into play. I have to confess that I love John Dee. I have been fascinated by this real historical character for many years. He is without a doubt one of the most significant and yet secretive and mysterious figures of the Elizabethan era.

At that time in England, the University of Cambridge was responsible for a whole group of academics, lawyers and classical scholars who worked at the royal courts and palaces – including William Cecil, Roger Ascham and John Cheke. Cecil needs no introduction, but Ascham and Check were tutors to Jane Grey and the young King Edward, as well as Elizabeth herself and Robert Dudley. It was a small, tightly-knit community of intellectuals who all knew one another and who collectively wielded considerable influence.

Once the reign of queen Mary commenced in 1553, however, the whole country changed. Catholicism was restored, and a strong and often cruel and vengeful reaction to the earlier Protestant reforms took place. The intellectual climate changed, and many of these learned men were removed from favour or else had to flee for their own safety. John Dee, although among the youngest, was one of the most brilliant among this group. He was, even then, recognised as one of the most gifted mathematicians of his day. He was also a geographer, astronomer, a spy and a renaissance magician and alchemist. Some believe he was also the original James Bond (he sometimes signed his documents with a distinctive ‘007’ symbol). We meet him here as a young man, handsome and courageous, inventive and clever. He has an almost chivalric admiration for the young Elizabeth, and pledges himself to work tirelessly to aid and protect her though her darkest days – making for what is possibly one of the most remarkable and yet untold relationships of the Tudor age.

That is the framework of the novel. At 490 pages, it is a big read – so something you can really get your teeth into – and suffice to say that there are quite a few surprises as the characters grow and develop through adversity and bitter experience. Along the way you will meet the cruel and vengeful Queen (‘Bloody’) Mary, the scheming John Dudley and his handsome and ardent son, Robert. You will encounter Elizabeth’s faithful servants, the devoted Blanche Parry and Kat Ashley. You will be privy to the designs of the fiery rebel Tom Wyatt, and the dark deeds of Bishop Gardiner who believed that torture, execution and burning people at the stake should become the favoured instruments of statecraft. You will meet William Cecil, as well, the quiet man, who became Elizabeth’s, Chief Minister and remained her life-long companion in power.

Finally, you will be urged to consider certain important questions. Did Elizabeth, as a young girl, for example, have an affair with Thomas Seymour? Did she begin a romance with Robert Dudley at this early stage in her life? Was she aware of the rebellion in 1554, led by Thomas Wyatt to topple Queen Mary? Was she guilty of attempting to ‘enchant’ and to work magic upon the Queen – and was John Dee guilty of aiding and abetting her? These are the questions that I found so compelling when I began researching this book. I hope you will find them equally as fascinating, and that you will enjoy searching for the answers with me as you begin to turn its pages.

“The brilliant young mathematician and astronomer John Dee has one overwhelming obsession: liberty. Abandoned and humiliated, Elizabeth Tudor has one simple aim: survival. What will happen when these two are thrown together by circumstances neither can anticipate or control? This is their story as Dee and the mysterious brotherhood of the Rose Lodge – working against almost insurmountable odds and threatened by a vengeful and unforgiving Queen – attempt to guide the nation towards enlightenment and stability. Here, a parallel universe of secrecy and faith is revealed in which the unseen forces of nature support all that is visible and real – a place, too, where the special alchemy of the Virgin and the Crab works its magic, growing from childhood friendship, through adolescent flirtation to mutual respect and admiration as together they prepare to sacrifice everything for the world they wish to inherit.”