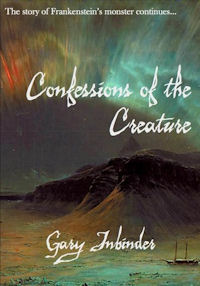 In venturing outside my usual genre I have discovered several great reads lately, including this one—Confessions of the Creature by Gary Inbinder, which is a continuation of Mary Shelley’s classic,Frankenstein. The creature has exacted revenge on his creator, retreated into the wilds of Russia and later finds himself transforming from monster to man. He rejoins society and moves up the ranks, becoming a military hero and gentleman. This novel is about a monster turned man, trying to understand and thrive in society, all the while suppressing the monster within. After finishing this beautifully crafted story, I sought out the author and asked him to answer a few questions, which you will find below. You can read my full review in Historical Novels Review’s August 2012 issue.

Continuations of classics are all the rage at the moment, as are zombies, vampires and other creatures. What prompted you to write your own version of Mary Shelley’s classic novel, Frankenstein?

The subject’s fascinated me ever since I read the novel when I was in High School. (How long ago was that? Hint: The Beachboys’ “Good Vibrations” was at the top of the charts). At the time, none of the familiar films came close to Mary Shelley’s original and most readers were put off by her early nineteenth century prose, the literary allusions, and references to Enlightenment philosophy. Horror fans didn’t seem to care much for an articulate, highly intelligent monster. Moreover, none of the early films got the time (the 1790s) and the places (Switzerland, Bavaria, The Orkney Islands, and the Arctic seas north of Russia) right. To my knowledge, it wasn’t until Kenneth Branagh’s “Mary Shelley’s Frankenstein (1994) that a film followed the original closely, and even Branagh made some questionable changes. Anyway, I had the idea of a continuation of “Frankenstein” that respected the original while providing the monster with a chance at a “normal” life given the time, place, and circumstances in which he found himself at the end of Mary Shelley’s novel.

Though I have never read Frankenstein in its entirely, I have, like most people, an idea of the original, through movies and pop culture. Even so, I had no problems whatsoever following Viktor’s thoughts and flashbacks covering the events in the original. Do you recommend readers first take on the classic before reading your continued version?

I believe Historical Fiction readers who know the period can enjoy my novel without having read the original. On the other hand, some Horror fans who have the Boris Karloff image and old Hollywood story-line indelibly implanted in their brains might have a problem, or at least want some historical reference or context from the original.

Viktor constantly struggles with his inner creature, which threatens to emerge at highly emotional or dangerous moments. Do you feel that his occupation as a soldier suppresses the monster, or at least gives a sort of outlet so that he is able to live a fairly normal existence during peace time?

This question raises some of the philosophical/psychological subtext of “Frankenstein” and my re-imagined sequel. Percy Bysshe Shelley, following Rousseau, extolled “natural goodness” believing that society had corrupted human nature. Humanity could, from Shelley’s perspective, regain a lost “Paradise” by returning to nature and living simply and communally. Byron saw evil as an active force in nature and he rejected Shelley’s utopianism. Viktor, like Byron, sees a duality in nature, a constant struggle for survival between predators and prey and an unresolved conflict between good and evil. He is not a pacifist, like Shelley, and his dualism carries over into his soldiering. He sees the horror of war as the “monster” (rape, pillage, murder, atrocities) coexisting with “beauty” reflected in his transformed self (courage, loyalty, self-sacrifice, comradeship) in the same way he views the constant struggle for survival in nature. This “dual consciousness of being” is a theme running through my novel, and we can find it in the writings of the Shelleys, Byron, and other poets, novelists, and philosophers of that era. Moreover, as much as she loved her husband, I believe Mary turned away from his utopianism, and that change in her philosophy may have been due to her own tragic life experience.

This novel appeals to a wide audience—you will find a bit of romance, discussion on literature and philosophy, war and horror. Which, as a reader, is your primary interest? Who are some of your favorite authors?

I’m an eclectic reader. In addition to period fiction, I’ve read a great deal of historical non-fiction for research purposes but also for pleasure. I’ve also read books on religion, philosophy, psychology and the sciences because I believe that adds depth and context to my fiction. I majored in English Literature in college so I had good exposure to the literary classics. After college I tended to read in streaks. For example, at one time I read as much Zola as I could get my hands on. Recently I’ve been reading Henry James, Edith Wharton, and Evelyn Waugh, to gain more insight into the period (1880-1930) and the society (upper-class Anglo-American and Expats) that they wrote about, but also because I admire their prose style, narrative, and characterizations. But I also like contemporary Historical Fiction. For example, I loved Arthur Golden’s “Memoirs of a Geisha” and I recently enjoyed reading Stephanie Cowell’s “Claude and Camille.”

We do not much see Napoleon in action, as Viktor is on the opposing side, but of the characters that are actual historical figures, are any true-to-life more so than others? Which character was your favorite to research and recreate?

Napoleon is a looming presence in my novel, like an invisible hand moving the chess-pieces on the other side of the board. I didn’t want to demonize him the way Tolstoy did in “War and Peace.” Rather, in reference to the philosophical theme I previously mentioned, Viktor sees Napoleon as a transformative force for both good and evil. Regarding the other historical figures, Count Arakcheyev was an intriguing and sinister character. He rose through the ranks to become Tsar Alexander’s most powerful and most hated minister and, for a period, the virtual ruler of Russia, during which time he gained a reputation for ruthlessness. He plays an important role in Viktor’s life toward the end of the novel. And of course, there was Mary Shelley who figures prominently in two key chapters. It was she who gave “birth” to Frankenstein and the creature.

I really enjoyed how the story ended, because I was expecting utter emotional devastation for the characters—however, it was done nicely even though there was tragedy and a coming to terms with the monster. Had you planned the ending beforehand, or did it emerge as you were writing?

I’ll carefully avoid spoilers in this answer. The ending was not planned beforehand; it developed and emerged from the situation and relationships among the characters. Briefly, and without giving anything away, the story needed a dramatic climax involving a crisis followed by what I believe is a hopeful denouement and ending.

With settings across Europe, Russia and the Arctic, can you tell us a bit about your research for this novel? You seem well-versed in the Napoleonic Wars and the hierarchy of society in and out of the military environment.

The story was the result of a lifetime of reading period fiction, historical fiction, and non-fiction with several months brushing-up on the details. To get things right I relied primarily on books in my own library and online research. I also got some specific details (military organization, chain of command, operational theaters, uniforms, ranks, honors, etc.) from a recently published reference book about the Russian Army during the Napoleonic Wars.

Lastly—inquiring minds would like to know—are you working on another writing project?

I’ve completed a manuscript for a Neo-Victorian Gothic/Paranormal Historical Romance and I’m waiting for some reader feedback before I decide what to do with it. I’ve also started a new Historical novel set in late nineteenth century Paris that incorporates some of the characters from my novel The Flower to the Painter.