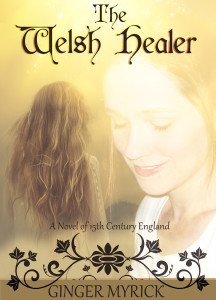 Author Ginger Myrick has answered some questions regarding her latest novel, The Welsh Healer. If you read my review, you will know the background of this book and why it is special to me. I may be biased, but this is truly great historical fiction set in an era that’s used considerably less than the popular Tudor era, though it does lead up to the Welsh born Henry VII. If you’re a fan of Jean Plaidy or Anya Seton, you will love Ginger Myrick’s writing!

How did you feel about adding a little magic into your latest historical novel? Did you have any misgivings about the reactions of your readers?

Actually, the thought never entered my mind! I can be extremely dense sometimes, and rarely take my audience into consideration. I don’t mean to sound uncaring, but my inspirations come as they are, and I have no control over them. The storylines are pretty much fully formed regardless of genre or what I would like them to be. And that’s probably a huge part of why I struggle with the marketing part of all this writing stuff! If I could choose, I would probably opt for a more commercial project! The only reason I included the warning about the supernatural element was because of a reader. It was someone who LOVED El Rey. I offered her a complimentary copy of The Welsh Healer, and she refused it. I completely respect her reasons. It really brought home to me how subjective people’s opinions are, even from one book to the next.

I now know, from personal experience, that you enjoy incorporating family and friends into your characters. Which characters (from either book) are entirely the products of your imagination with no outside influence?

In El Rey I would have to say Iñigo represents the father I wish I had. Serafina was a complete fabrication. In The Welsh Healer Richard and Peter are products of my imagination. Every other major character is either based on a familiar person or has traits of one. I find that if I write what I know, I do a pretty decent job of bringing the characters to life. I’m not so much a writer as a keen observer.

Both El Rey and The Welsh Healer cast a canine companion front and center—what draws you to this characterization, and can we expect an animal appearance in your future books?

The dog in The Welsh Healer was integral to the story. The physical description of the dog was based on a giant black German Shepherd whom we loved for over 12 years (I still have trouble not crying when I think about him!) Palhaço was just a fun little thing I threw into El Rey, because I think he is so darn cute, although he did turn out to play an important role. There won’t be one in my next project (if it indeed turns out to be the same one I’m considering!) But my Civil War novel does have a dog in it. That book is based on another of my dear friends, and she has a dog. I am an animal-lover through and through, and most of the people close to me also have animals. Besides, look who’s talking! How many pets do you have?

I am awed by your ability to create a writing schedule and stick to it! Can you share your secret with budding writers?

The secret is to ignore everything else! Really! The funny thing is that now I can sort of immerse myself in that other world at will. Even with the TV going and battle raging in the other room (I know you can identify with this!) after a while, it all fades into the background. It also helps that I don’t have a job.

Until just a few years ago, I was a full-time mom. I had no time to myself and never dreamed of writing a book. Then when my youngest boy stopped playing year-round sports and I was no longer shuttling him off to practice, games, team meetings, and fundraisers, I found myself with a lot more time on my hands. My husband only monopolizes my attention part of the time now. It works out well. He can’t sit still so he works like a maniac, and I can sit around all day long making up stories! He has been wonderfully supportive and turned out to be the biggest surprise in all of this. I am very fortunate in that regard.

But I have to say, I cannot even begin to imagine how you do all that you do. Work, kids, husband, books, and a website … it makes me tired just thinking about it. You are truly the astonishing one. Wonder Woman!

How was the writing process as compared with your first novel? How much research went into each?

Well, the research for The Welsh Healer was very broken up. I gathered most of the information on the folklore before the inspiration for El Rey struck. And although the basic story remained the same, some of the aspects changed when I decided to use you for my muse. Fortunately, I am a lifetime fan of royal English bloodlines and have read enough about them to be fairly familiar. It gave me a starting point and made for much less digging. When I am writing, I develop a sort of flow for my research. That’s why I only write one book at a time. I know other writers who have four books going at once, and I cannot imagine the chaos in their heads!

The writing process was much quicker this time. I basically just pounded it out then went back through once for proofreading and structure and a second time for flow. As you know, I still didn’t catch everything. I know I should have let it sit longer before the final read, but I wanted to see how fast I could do it. With El Rey I agonized over every section, trying to get it perfect before moving on to the next. It was a lot of wasted time, because until you read your book from cover to cover, you really have no idea what is going to make the cut. Why spend time perfecting something that will wind up in the trash?

Do you think your characters will always be on the fringes of history, or do you plan to use a real historical figure as a main character some day?

I can’t say. As of now, I have four ideas that need to get out of my head before I think about something completely new. I also have ideas for sequels if any of the books really take off. But I never know when or by what/whom I will be inspired next! As you know, I put aside the Civil War book, of which I had already written 30K words, to pursue The Welsh Healer. It all starts with just a glimmering …

As always, thank you, Arleigh, for your time and unwavering support. I feel privileged to consider you my friend. And thank you, readers. I have difficulty understanding why anyone would find me interesting, but I am grateful for your attention, and my fondest hope is that you will enjoy my stories.

The Welsh Healer: A Novel of 15th Century England tells the compelling story of a young woman growing up in the midst of the Hundred Years’ War. Spanning the reigns of Richard II, Henry IV, and Henry V, it touches upon historical events including the Welsh rebellion, the English army’s invasion of France, and their triumph at Agincourt.

Arlais is the gentle and free-spirited daughter of a humble Welsh household. Though just managing to scrape out a living in the rugged hills of northern Wales, her loving environment and strong family ties make for a happy home. But there is more to her than meets the eye. She is endowed with a mystical gift passed down through an ancient line of healers. She has been told her entire life that she is the fulfillment of a prophecy and destined to preserve the bloodline of kings. But despite the wondrous expectations for her future, she is content to wait for her intended mate, a mysterious man seen in a dream on her tenth birthday.

But the Welsh rebellion strikes and turns her world upside down. Arlais is forced to journey across the whole of Britain to live with a distant relative. While the events foretold by the prophecy unfold around her, she settles into the unfamiliar country continuing her path toward fulfilling her destiny and experiencing companionship, heartache, and even love along the way.