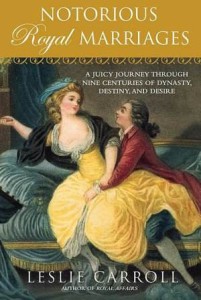 1. There are more than 50 books and 20 articles cited as sources for Notorious Royal Marriages. The research involved is mind boggling, though you have written and published two non-fiction books. What is your typical schedule when researching and writing? Do you research as you go?

First Arleigh, I’d like to say thanks so much for this interview. I’m delighted to visit Historical-fiction.com. And these are wonderful questions!

I do indeed research as I go, chapter by chapter and subject by subject; although I don’t necessarily write the chapters in the chronological order in which they appear in the book. Often I’ll start with the books I already own on a given person; consequently, those are the chapters that get written first. That said, I invariably need additional biographies or other research materials on those subjects. I’ll get as many books as I can from the New York Public Library system. If a book I need isn’t available through the public library I’ll order it from an online bookseller. Many of the books I need are out of print, and I also look for used copies in order to save money. When you need to read 60 biographies, the cost really adds up ifn you have to purchase several of them!

If it takes a while for the research books I need on any given royal to reach my local branch library, I’ll focus on researching a different royal until the books arrive. Typically I’ll research one royal, take dozens of pages of handwritten notes, and then write the chapter. If I’m scrambling to finish my research on a given royal before the library books are due then I’ll research a few royals in a row and write their chapters later. I don’t like to keep renewing the library books because it eats into my schedule, and I’ve already got that time all planned out for focusing on other royals.

Because I have fairly tight deadlines I need to set myself a schedule for each chapter. If I only have 9 months to write the book (which was the case with NOTORIOUS ROYAL MARRIAGES), then I can’t spend (hypothetically) a whole month on a single royal (unless we’re taking about someone like Henry VIII who merits multiple chapters). So I’m always doing something. I’ve got a research book in my purse when I’m on mass transit. There’s very little time for pleasure reading or needlework, which are two of my passions. And my sweet, patient husband even understands that when we’re watching a movie on the couch together, I’m occasionally multitasking by reading a heavy historical biography in order to stay on schedule.

2. I’ve noticed you are sympathetic to certain women in history, such as Eleanor of Aquitaine and Anne Boleyn. Why do you tend to be kinder to these ladies than other historians?

Since I’d venture to guess that we’re invariably reading the same biographical material, it may have to do with the perceptions that each of us takes away from that experience. I may begin with a preconceived notion of some of these too-often vilified queens, but the more I read about their lives the more open my mind becomes about them. It may have something to do with my background as an actress. I’ve spent many years learning how to analyze a character’s words and actions and get inside her head and under her skin; like a sleuth, I endeavor to figure out what motivates her to do what she does and say what she says? What do others around her say about her. Are they trustworthy sources or do they intend to paint a negative portrait that would support their own agenda?

In the largely illiterate society of the Middle Ages and into the Renaissance, the monks were the ones who could read (and in fact, only a small segment of them could actually do that) and who wrote the chronicles of their day. They tended to be misogynistic, mistrustful of women in general—and especially of women in positions of power and influence. Then you have to know a bit about the source itself in the context of the era and in relation to the person under discussion. For example, Sir Thomas More was a Tudor-era minister, so naturally he might disparage the previous dynasty, the Yorks. And, to get back to one of the queens in question, we know he was no fan of Anne Boleyn. So rather than take a contemporary account of the life or actions of these women (and their husbands) as gospel truth, I try very hard to consider the source.

Additionally, as I delve into my research on these royal women I am inclined to be sympathetic to them—innocent until proven guilty. That’s not to say that they didn’t do some questionable things, or even some inexcusable ones. But I look for, and try to understand, the motive behind them.

3. Of the 32 royal couples listed who is your favorite and why?

I spent so much time with these couples that each of them found a place in my heart. But if I have to choose one, I would say that Marie Antoinette and the dauphin—the future Louis XVI—became my favorite because what I came away with after researching their relationship extensively is that they were so misunderstood—as royals, and as human beings. They’re a perfect example of a situation where I entered my research with preconceived notions (for instance, that he was a doofus or a dolt and that she was a bubbleheaded shopaholic); yet the more I read about them, the more sympathetic I found them. In fact, I found Marie Antoinette and Louis so intriguing—as individuals, as a couple, and in the context of their time—that I couldn’t wait to turn my historical fiction pen (okay, keyboard) to Marie Antoinette’s story.

4. You cover many eras and lands in Notorious Royal Marriages. Is there a certain place or time period that you love to write about, more so than others?

I adore the Restoration, although, sad to say, Charles II’s marriage to Catherine of Braganza ended up on the proverbial cutting room floor, because my original draft for NOTORIOUS ROYAL MARRIAGES ran to 834 pages!

And yet—all my life I’ve had a particular passion and affinity for the Georgian era. I’ll walk into a room that’s hung with drapes in a textile design that resembles Christmas ribbon candy, or that has a certain type of molding or mantelpiece and my head will nod, and a secret smile will steal across my lips and I’ll think, Yeah, that’s it. I’m home. I have a visceral reaction to eighteenth-century façades and interiors (as well as to the clothes) from the eighteenth century. And so far, all of my historical fiction has been set in the Georgian era, except for THE MEMOIRS OF HELEN OF TROY—which was my first historical novel to be published. That book poured out me, born of a fascination since childhood with ancient Greek civilization and mythology, and in particular with Helen’s story. My maternal grandmother loved Greek mythology and gave me my first copy of Bullfinch’s when I was still in grade school. I was very much drawn to Helen because—like many of the queens and royal mistresses I write about—she has been much maligned over the centuries. Not only that, our mothers share the same name: Leda. ? In fact, I dedicated my novel to my mother.

5. Are you working on another non-fiction or a novel? What can we expect next?

Both! I am currently at work on a third nonfiction book for NAL. The working title is ROYAL PAINS: A Rogues’ Gallery of Brats, Bastards, and Bad Seeds. And I recently received a contract from Random House to write a historical fiction trilogy on the life of Marie Antoinette. I spent all last spring and summer researching her life, even as I was going through the editorial process for NOTORIOUS ROYAL MARRIAGES and beginning my research and writing for ROYAL PAINS. I’m tremendously excited about all of my projects. I think that ROYAL PAINS is scheduled to be published in March, 2011; and the first of the Marie Antoinette novels may also hit the shelves that year.

One final note to our readers: Even (or especially) in this economy—please donate whatever you can afford to support your local public library system! What would we do without them?

“A funny, raucous, and delightfully dirty 900-year history of the royal marriages of Europe’s most famous-and infamous-monarchs.

Since time immemorial, royal marriages have had little to do with love- and almost everything to do with diplomacy and dynasty. Clashing personalities have joined in unholy matrimony to form such infamous couples as Russia’s Peter II and Catherine the Great, and France’s Henri II and Catherine de Medici-all with the purpose of begetting a male heir. But with tensions high and silverware flying, kings like England’s Henry II have fled to the beds of their nubile mistresses, while queens such as Eleanor of Aquitaine have plotted their revenge…

Full of the juicy gossip and bad behavior that characterized Royal Affairs, this book chronicles the love-hate marriages of the crowned heads of Europe-from the Angevins to Charles and Di-and ponders how dynasties ever survived at all.”