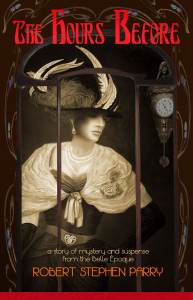 The Hours Before begins with an interesting character perspective. Can you explain why you chose this path for the introduction?

Perhaps one of the easiest mistakes we can make in life (and the more successful, wealthy or comfortable one becomes the easier it is to make it) is to assume that humility and modesty are indications of inferiority in those we encounter – when in fact they can be, and often are, just the opposite. The world’s great religions, and even many of our most popular stories and myths teach us this. I have always been fascinated by the scenario outlined in the Bhagavad Gita – the Hindu spiritual classic – in which, on the eve of battle, the hero Arjuna is visited by the god Krishna in the disguise of a humble servant who offers himself as his charioteer. During the hours before the battle, Krishna, whose identity remains concealed for much of time, presents a series of moral precepts that aid Arjuna in the decisions he must make. Only gradually is the charioteer’s true identity revealed, which makes his message all the more powerful. I have tried to echo this interaction at the start of the novel through the relationship between Deborah (the vengeful courtesan, on the eve of her own personal battle) and Kristina (the maid who guides her through the past and into the future).

There is plenty of history behind certain cults of the era. Is your plot related to any real events or persons of the late 19th century? To your knowledge, was there a panic about the coming turn of the century?

‘The Hours Before’ is not based on any real-life persons or events at all. But to answer the second aspect of your question: indeed there was a good deal of low-level anxiety in 1899 – just as there was in our own times with the approach of the year 2000. The difference then was that 1900 coincided with a period of immense social uncertainty – and nowhere was this more acutely felt than in England, France and the Austro-Hungarian Empire, where much of the action of the story take place. Anarchist movements were rife. The rise of socialist parties, trades unions and the approach of universal suffrage were seen as ultimately unstoppable. The term ‘Belle Époque, the period of history in which the novel is set, was only awarded retrospectively, looking back to the world as it existed prior to the first world war. It means, literally, ‘the beautiful era.’ There was a sense that the idyllic way of life enjoyed by the fortunate few was about to crumble. As it did so, unfortunately, it took with it much of the formality, order and ethical basis of society. It gave rise to a sense cynicism and finality, a sense of pathos, and this is the ‘mood music’ of the novel.

Divorce was more common in England by this time, but Deborah Peters was ostracized from society and the scandal played out in the media. Can you describe the journalism culture of the time?

Journalism has always been fascinated by gossip and scandal, or by the toppling of celebrities. In Georgian times, for example, there was the Tory press versus the Whig press, wickedly satirical – and by the turn of the 20th Century, the new medium of photo journalism was also beginning to add an even more popularist, celebrity-based approach to the mix. The busy world of London’s Fleet Street at the dawn of the Edwardian era permeates much of the novel, not just because the antagonist, Hugh, is the head of a publishing empire, but because the press in this sense represents the popular, material message of the age. This, can then be set against the ‘moral message’ that Deborah comes to understand through her conversations with Kristina or, if you choose to interpret things in a different way, by the prompting of her own conscience. In other words, it is a conflict between cynicism and faith, revenge and forgiveness.

Did you come across any other intriguing facts during your research?

Certainly. Research always reveals all kinds of fascinating historical characters and situations. The Belle Époque was a time of great excess and extravagance – but all this combined with the manners and formality of earlier times still intact. This created a very special confluence of arts and fashion, of political forces and opposing ideals that, in my view, has no equal. Deborah in ‘The Hours Before’ is a very strong character who has had to re-invent herself after much hardship and has made the best of her good looks and personality. Studying the lives of similar women, the socialites, actresses and courtesans of the times (the Grand Horizontales, as they were fondly termed) was fascinating – while delving into some of the perceived origins of the first world war was also a most interesting process, albeit not quite so agreeable.

Where are you taking your readers next?

We’re heading a little further back in time to the middle of the 19th Century and the height of the Victorian era in England. It is a ‘fictional-memoir’ style of book, a ghost story on the surface, combined with a scandal at the heart of Victorian society.

Title: THE HOURS BEFORE
Sub-title: A Story of Mystery and Suspense from the Belle Epoque
Genre: Historical Fiction
Page Count: 410
Dimensions: 8.5″ x 5.5″ in paperback
Also available on Kindle

Synopsis: In darkness, late at night, a woman returns to her hotel to discover her usual maid has been replaced by a stranger. What begins as an icy exchange, born of weariness, becomes within minutes one of the most extraordinary encounters of her life. It will take her on a journey deep into her past and towards the fateful assignation that already awaits her on the other side of the night.

Set amid the elegance and sophistication of the Belle Époque, and the Gothic splendour of late Victorian England, ‘The Hours Before’ is a story of drama, mystery and romance, revealing a hidden world of vice and malevolence – but also a pathway of transformation and knowledge.

Book Trailer & The Making of the Cover