I love stories about authors, and have read several (A Wilder Rose, A Country Road, A Tree, Shame the Devil, Mrs. Poe, Twain’s End, The World Within, The Other Alcott, The Missing Manuscript of Jane Austen, Love Disguised, Nobody’s Secret, Loving Will Shakespeare, Miss Emily, The Secret Confessions of Anne Shakespeare, A Jane Austen Daydream, Mrs. Hemingway). Below are more to add to the reading list! 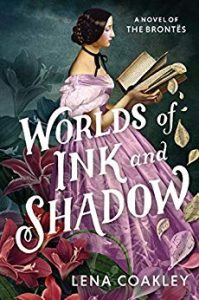 Worlds of Ink and Shadow: A Novel of the Brontës
by Lena Coakley

Charlotte, Branwell, Emily, and Anne. The Brontë siblings find escape from their constrained lives via their rich imaginations. The glittering world of Verdopolis and the romantic and melancholy world of Gondal literally come to life under their pens, offering the sort of romance and intrigue missing from their isolated parsonage home. But at what price? As Branwell begins to slip into madness and the sisters feel their real lives slipping away, they must weigh the cost of their powerful imaginations, even as the characters they have created—the brooding Rogue and dashing Duke of Zamorna—refuse to let them go.

Gorgeously written and based on the Brontës’ juvenilia, Worlds of Ink and Shadow brings to life one of history’s most celebrated literary families in a thrilling, suspenseful fantasy. 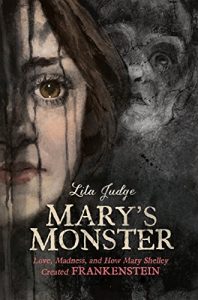 Pairing free verse with over three hundred pages of black-and-white watercolor illustrations, Mary’s Monster is a unique and stunning biography of Mary Shelley, the pregnant teenage runaway who became one of the greatest authors of all time.

Legend is correct that Mary Shelley began penning Frankenstein in answer to a dare to write a ghost story. What most people don’t know, however, is that the seeds of her novel had been planted long before that night. By age nineteen, she had been disowned by her family, was living in scandal with a married man, and had lost her baby daughter just days after her birth. Mary poured her grief, pain, and passion into the powerful book still revered two hundred years later, and in Mary’s Monster, author/illustrator Lita Judge has poured her own passion into a gorgeous book that pays tribute to the life of this incredible author. 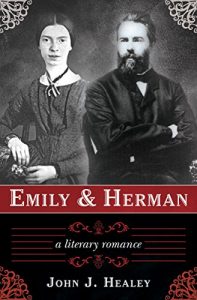 It’s the summer of 1851. Herman Melville is finishing Moby Dick on his family farm in the Berkshire Hills of western Massachusetts, surrounded by his mother, sisters, and pregnant wife. It’s a calm and productive season until Herman’s neighbor, Nathaniel Hawthorne, lures him to Amherst. There they meet chaste, twenty-year-old Emily Dickinson and her brother, Austin. On a whim, the two distinguished authors invite the Dickinson siblings to accompany them on a trip to Boston and New York. It’s here that they cross paths with journalist Walt Whitman and runaway slave, William Johnson. And it’s here that Emily and Herman—bold maiden and married man—both flushed with the excitement of new adventures, fall uncontrollably in love. 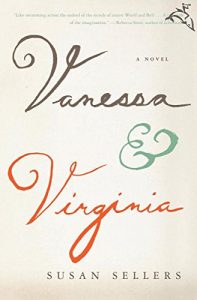 You see, even after all these years, I wonder if you really loved me. Vanessa and Virginia are sisters, best friends, bitter rivals, and artistic collaborators. As children, they fight for the attention of their overextended mother, their brilliant but difficult father, and their adored brother, Thoby. As young women, they support each other through a series of devastating deaths, then emerge in bohemian Bloomsbury, bent on creating new lives and groundbreaking works of art. Through everything—marriage, lovers, loss, madness, children, success and failure—the sisters remain the closest of co-conspirators. But they also betray each other.

In this lyrical, impressionistic account, written as a love letter and an elegy from Vanessa to Virginia, Susan Sellers imagines her way into the heart of the lifelong relationship between writer Virginia Woolf and painter Vanessa Bell. With sensitivity and fidelity to what is known of both lives, Sellers has created a powerful portrait of sibling rivalry, and “beautifully imagines what it must have meant to be a gifted artist yoked to a sister of dangerous, provocative genius” (Cleveland Plain Dealer). 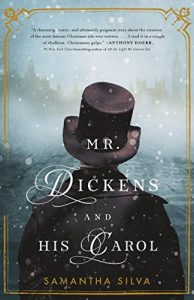 Mr. Dickens and His Carol
by Samantha Silva

Charles Dickens is not feeling the Christmas spirit. His newest book is an utter flop, the critics have turned against him, relatives near and far hound him for money. While his wife plans a lavish holiday party for their ever-expanding family and circle of friends, Dickens has visions of the poor house. But when his publishers try to blackmail him into writing a Christmas book to save them all from financial ruin, he refuses. And a serious bout of writer’s block sets in.

Frazzled and filled with self-doubt, Dickens seeks solace in his great palace of thinking, the city of London itself. On one of his long night walks, in a once-beloved square, he meets the mysterious Eleanor Lovejoy, who might be just the muse he needs. As Dickens’ deadlines close in, Eleanor propels him on a Scrooge-like journey that tests everything he believes about generosity, friendship, ambition, and love. The story he writes will change Christmas forever.