It’s been a very hectic year with my new career, and I have not had the luxury of free time as I had in the past. But, I plan for 2020 to be different. I can’t lose sight of this part of me–the reader. It has been the pathway to my current endeavors, and I miss being continually immersed in another world. I have a handful of books I have been pecking away at for months, so let’s talk about those! 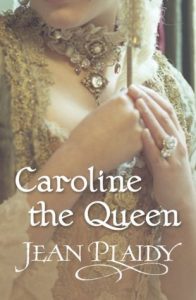 Caroline, the Queen
by Jean Plaidy

The 11-volume Georgian saga has been among my favorites of hers, and going back to Royal Intrigue and reading through my reviews made me want to pick up one of the few I have not read. It honestly started out slow and a bit uninteresting, but things picked up about a quarter into it, and I am now about halfway through (412 pages). There are some intriguing characters to counter the dull ones and I have enjoyed some of Plaidy’s rabbit-hole side stories she injects into the narrative.

The survival of the British monarchy as a popular institution owes a lot to its queens who were, more often than not, more intelligent than their husbands. Caroline of Ansbach is such a queen. Well-educated and from one of the poorer German principalities, Caroline married into the boorish House of Hanover. It isn’t long before she discovered she’s caught between a loathsome, vindictive father-in-law, George I, and her not-too-bright and domineering husband, the future George II. The House of Hanover, newly ascended to the English throne, would not have survived on the personal popularity of its kings. It took the cleverness of Caroline coupled with that of Sir Robert Walpole, the Prime Minister, to keep things in balance.Jean Plaidy tells the tale of the reign of George I through the personal trauma of this most remarkable of English Queens. 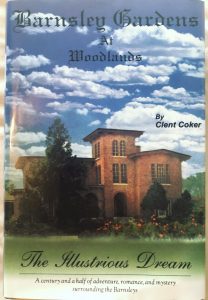 On my birthday this year my traveling friend, Kaaren, and I decided to do the tour at Barnsley Gardens in Adairsville, GA. I grew up close to this resort–although it was not a resort at the time, only an old estate in ruins. This book tells the history behind the Italianate mansion and the people who lived there. It is utterly fascinating!

It was a time when the southern ports supplied the world with King Cotton, vast plantations bloomed, and the lure of newly evacuated Indian lands to the North, led wealthy sea merchants to adventure into the unknown.

One such wealthy figure was Godfrey Barnsley, a transplanted Englishman who had amassed a huge fortune on the Savannah waterfront during the 1830’s. While plagued by the dreadful heat and Yellow Fever of the lowlands in the mid nineteenth century, he transported his wife and family, and a fleet of servants into the cooler climate of the Georgia up-country. Here he purchased large tracts of the old Cherokee Indians lands and erected a fabulous home and gardens, a prominent oasis amidst the lovely mountains of northwest Georgia. Barnsley Manor featured modern plumbing with running hot and cold water, and many other intricate features far ahead of its time. The magnificent setting was considered a grand showcase of the South with visitors coming from far and near to enjoy the breath taking beauty peacefulness of Barnsley Gardens at Woodlands.

A few years later, during the fire and passion of the Southern rebellion, it was Godfrey’s glamorous daughter, Julia, that became the real stronghold of Woodlands. Julia proved to be a typical “Scarlet”, who laid down her finery and worked in the fields, to preserve her father’s “Illustrious Dream” – a truly foregoing “Tara”. It was that bitter peace inflicted upon the South by the invading forces of General Sherman’s “blue bellies” that leveled the Barnsley fortune, but the great house and gardens remained–from the turbulent days of Southern reconstruction, to the violence of prohibition, the Barnsleys continued to live on the estate. The last of the family blood to reside at the homestead passed from the scene in 1942, thus closing the final chapter of the colorful Barnsleys at Woodlands. Their beginnings and endings are all tied to this land, this place of bountiful joy, tearful sadness, and a thousand stories regarding a family created by a wealthy Britisher, and a striking young lady from Savannah, Georgia.

Now the grand estate has a past filled with romance, historical significance, and mystical legends amidst a most beautiful setting. Three generations of the Barnsleys are still resting here, on a little knoll south of the great house–in this place Godfrey Barnsley called Woodlands. 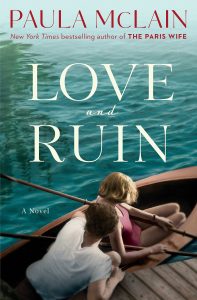 Love and Ruin
by Paula McLain

This is one of the books I have received for review over the past year that I just haven’t had the time to finish. I have read to chapter 22, and it is an interesting story with an unusual setting, and I like the protagonist. Hopefully I will have a more complete assessment in the coming weeks.

The bestselling author of The Paris Wife brings to life the story of Martha Gellhorn—a fiercely independent, ambitious woman ahead of her time, who would become one of the greatest war correspondents of the twentieth century.

In 1937, twenty-eight-year-old Martha Gellhorn travels alone to Madrid to report on the atrocities of the Spanish Civil War and becomes drawn to the stories of ordinary people caught in the devastating conflict. It’s her chance to prove herself a worthy journalist in a field dominated by men. There she also finds herself unexpectedly—and unwillingly—falling in love with Ernest Hemingway, a man on his way to becoming a legend.

On the eve of World War II, and set against the turbulent backdrops of Madrid and Cuba, Martha and Ernest’s relationship and careers ignite. But when Ernest publishes the biggest literary success of his career, For Whom the Bell Tolls, they are no longer equals, and Martha must forge a path as her own woman and writer.

Heralded by Ann Patchett as “the new star of historical fiction,” Paula McLain brings Gellhorn’s story richly to life and captures her as a heroine for the ages: a woman who will risk absolutely everything to find her own voice. 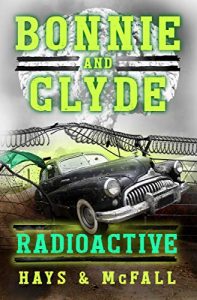 I read and enjoyed the first and second installments of this series, and have every intention of getting to this one!

THE REVENGE OF BONNIE AND CLYDE
Saving the future by exploding the past.

It’s January 1945, six years since the start of World War Two. As the bloody conflict drags on, America has undertaken a massive top-secret effort to unleash the power of the atom and develop the first nuclear bomb. A network of Nazi and Soviet spies is determined to steal the technology or, failing that, sabotage the project.

But first, they have to get past Bonnie and Clyde.

A decade has passed since the infamous outlaw lovers were spared their gruesome deaths and forced into a covert life. Now seasoned spies, they’re embedded in the Manhattan Project, as bar owners and petty crooks, trying to sort out who would sell out the USA to its enemies.

In a heart-pounding adventure spanning the windswept landscapes of eastern Washington to an isolated internment camp in the California mountains, Bonnie and Clyde face deception at every turn along with a personal tragedy, pushing them close to the edge.
Can the former outlaws put aside their desire for revenge long enough to help end the war?

The thrilling story cuts back and forth between the modern era where a washed-up investigative reporter teams up with the now-elderly Bonnie Parker to hunt down the truth, risking their own lives, and the dangerous 1940s undercover exploits of the young Bonnie and Clyde, as they are thrust into a battle that will define the future global power structure.

Bonnie and Clyde: Radioactive concludes the explosive “what-if” story about two unlikely heroes fighting to preserve the founding principles of American democracy–a historical thriller that reimagines the past to reclaim the present.