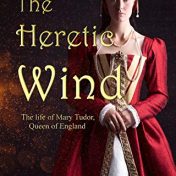 Jan 2020 Release – Amazon Link BOOK DESCRIPTION Adored by her parents and pampered by the court, the infant Princess Mary’s life changes suddenly and drastically when her father’s eye is taken by the enigmatic Anne Boleyn. Mary stands firm against her father’s determination to destroy both her mother’s reputation, and the Catholic church. It is a battle that will… Read more »

The Midwife of Venice By Roberta Rich Venice, 1575. Hannah Levi , a midwife from the Jewish community, awaits news of her husband, who was captured during a business trip and imprisoned on the island of Malta. Desperate to raise the funds for his release, she accepts a hefty offer from a Venetian nobleman in exchange for saving his laboring… Read more »

Seven Will Out: A Renaissance Revel by JoAnn Spears In Spears’ previous novel, Six of One: A Tudor Riff, modern day historian Catherine “Dolly” Rolly traveled to an astral plane where she met the wives of Henry VIII and learned their stories from the source. This time Dolly returns and is met by the later generation Tudors, including Elizabeth I,… Read more »

Watch the Lady by Elizabeth Fremantle Penelope Devereux, daughter of Lettice Knollys, the woman Queen Elizabeth I called the “She-Wolf” for marrying the royal favorite, is pitted against the Essex faction’s rival, Robert Cecil, in this panoramic Tudor narrative. Penelope, beautiful, level-headed and witty, makes a perfect waiting lady and voice for the out-of-favor Devereux family, though it is her… Read more »

The Serpent Garden by Judith Merkle Riley With the death of her husband, Susanna found herself alone and in debt. The only way to survive was to take up the trade her father taught her, which she gave up upon marriage — painting portraits. As a merchant, Susanna was banned from selling her work and so she passed the paintings… Read more »

King’s Fool by Margaret Campbell Barnes Another great novel from this author! I really enjoyed her book My Lady of Cleves, though found the one on Anne Boleyn, Brief Gaudy Hour, had a sketchy timeline and depicted Anne as I hate seeing her: shallow and evil. This is the story of the life of Will Somers, royal jester to Henry… Read more »

The enigmatic Anne Boleyn comes to life in this charming, brilliant portrayal by acclaimed British novelist Margaret Campbell Barnes. The infamous love of King Henry VIII and the mother of Queen Elizabeth I, Anne Boleyn undertook a rocky journey from innocent courtier to powerful Queen of England. A meticulous researcher, Margaret Campbell Barnes immerses readers in this intrigue and in… Read more »

Elizabeth: The Virgin Queen and the Men Who Loved Her by Robert Stephen Parry A unique mixture of fact and fiction, this volume contains 14 short chapters on Queen Elizabeth I’s relationships with the various men in her life—from her cold and distant father to her trusted councilors and, of course, the well-documented round of suitors. While some chapters give… Read more »