Dorothy Dunnett’s THE GAME OF KINGS: Book One in the Legendary Lymond Chronicles. Combining all the political intrigue of Game of Thrones with the sweeping romanticism of Outlander, Dorothy Dunnett’s legendary Lymond Chronicles have enthralled readers for decades and amassed legions of devoted fans. The series will be reissued in an oversize trade paperback format on May 14th.

DOROTHY DUNNETT was born in Dunfermline, Scotland. She is the author of the Francis Crawford of Lymond novels; the House of Niccolò novels; seven mysteries; King Hereafter, an epic novel about Macbeth; and the text of The Scottish Highlands, a book of photographs by David Paterson, on which she collaborated with her husband, Sir Alastair Dunnett. In 1992, Queen Elizabeth appointed her an Officer of the Order of the British Empire. She died in 2001. 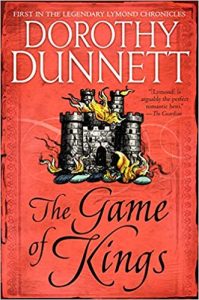 THE GAME OF KINGS
The year is 1547. Scotland is clinging to independence after a humiliating English invasion. Paradoxically, the country’s freedom may depend on a man who stands accused of treason. He is Francis Crawford of Lymond, a scapegrace nobleman of crooked felicities and murderous talents, with a scholar’s erudition and a wicked tongue. Clawing his way back into a country that has outlawed him, and to a family that has turned its back on him, Lymond will prove that he has both the will and the cunning to clear his name and defend his people—no matter the cost. 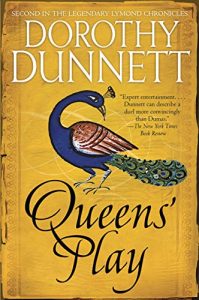 QUEEN’S PLAY
This second book in the legendary Lymond Chronicles follows Francis Crawford of Lymond who has been abruptly called into the service of Mary Queen of Scots.

Though she is only a little girl, the Queen is already the object of malicious intrigues that extend from her native country to the court of France. It is to France that Lymond must travel, exercising his sword hand and his agile wit while also undertaking the most unlikely of masquerades, all to make sure that his charge’s royal person stays intact. 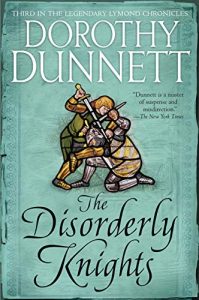 This third volume in The Lymond Chronicles, the highly renowned series of historical novels takes place in 1551, when Francis Crawford of Lymond is dispatched to embattled Malta, to assist the Knights of Hospitallers in defending the island against the Turks. But shortly the swordsman and scholar discovers that the greatest threat to the Knights lies within their own ranks, where various factions vie secretly for master. 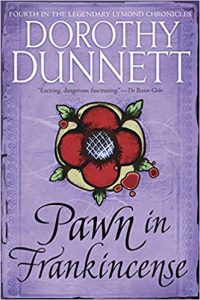 THE PAWN IN FRANKINCENSE

In this fourth book in the legendary Lymond Chronicles, Francis Crawford of Lymond desperately searches the Ottoman empire for his kidnapped child.

Somewhere within the bejeweled labyrinth of the Ottoman empire, a child is hidden. Now his father, Francis Crawford of Lymond, soldier of fortune and the exiled heir of Scottish nobility, is searching for him while ostensibly engaged on a mission to the Turkish Sultan. At stake is the political order of three continents, for Lymond’s child is a pawn in a cutthroat game whose gambits include treason, enslavement, and murder. In that game’s final move, which is played inside the harem of the Topkapi palace, Lymond will come face to face with his most implacable enemy and the dreadful ambiguities of his own nature. 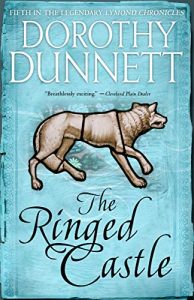 Fifth in the legendary Lymond Chronicles, The Ringed Castle leaps from Mary Tudor’s England to the barbaric Russia of Ivan the Terrible. Francis Crawford of Lymond moves to Muscovy, where he becomes advisor and general to the half-mad tsar. Yet even as Lymond tries to civilize a court that is still frozen in the attitudes of the Middle Ages, forces in England conspire to enlist this infinitely useful man in their own schemes. 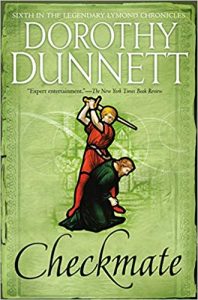 Sixth in the legendary Lymond Chronicles, Checkmate takes place in 1557, where Francis Crawford of Lymond is once again in France, leading an army against England. But even as the Scots adventurer succeeds brilliantly on the battlefield, his haunted past becomes a subject of intense interest to forces on both sides.