“That solemnity which etiquette, decorum and decency insisted should prevail could scarcely hide the excited expectation in the Palace of Kensington on that June morning in the year 1837.” 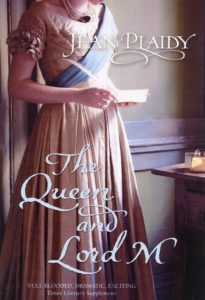 THE QUEEN AND LORD M
by Jean Plaidy

On the morning of 20th June 1837, an eighteen-year-old girl is called from her bed to be told that she is Queen of England. The Victorian age has begun. The young queen’s first few years are beset with court scandal and malicious gossip: there is the unsavoury Flora Hastings affair, a source of extreme embarrassment to the queen; the eternal conflict between Victoria and her mother; and, the young queen’s hatred of Sir John Conroy, her mother’s close friend. Then there is the Prime Minister, Lord Melbourne – ‘Lord M’ – worldly cynic and constant companion to the queen, himself a veteran of many a latter-day scandal. He proves to be her guiding light – until the dashing Prince Albert appears and she falls hopelessly in love.