Welcome to the initial post of First Line Friday, where I choose a book from my shelf and post the first sentence. I’ve been looking for a regular feature for H-F.com and decided on this one after seeing a Facebook meme about sharing the first line of your current read. Feel free to add first lines of your own in the comments, or swipe the FLF image above (yes, I made it from scratch with my own photo) and post on your site. Leave your link if you’d like!

“Though I often looked for one, I finally had to admit that there could be no cure for Paris.” 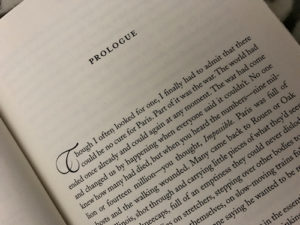 THE PARIS WIFE by Paula McLain

A deeply evocative story of ambition and betrayal, The Paris Wife captures the love affair between two unforgettable people: Ernest Hemingway and his wife Hadley.

Chicago, 1920: Hadley Richardson is a quiet twenty-eight-year-old who has all but given up on love and happiness—until she meets Ernest Hemingway. Following a whirlwind courtship and wedding, the pair set sail for Paris, where they become the golden couple in a lively and volatile group—the fabled “Lost Generation”—that includes Gertrude Stein, Ezra Pound, and F. Scott Fitzgerald.

Though deeply in love, the Hemingways are ill prepared for the hard-drinking, fast-living, and free-loving life of Jazz Age Paris. As Ernest struggles to find the voice that will earn him a place in history and pours himself into the novel that will become The Sun Also Rises, Hadley strives to hold on to her sense of self as her roles as wife, friend, and muse become more challenging. Eventually they find themselves facing the ultimate crisis of their marriage—a deception that will lead to the unraveling of everything they’ve fought so hard for.

A heartbreaking portrayal of love and torn loyalty, The Paris Wife is all the more poignant because we know that, in the end, Hemingway wrote that he would rather have died than fallen in love with anyone but Hadley.