“If you marry into glass,” Pierre Labbe warned my mother, his daughter Magdaleine, in 1747, “you will say good-bye to everything familiar, and enter a closed world.” 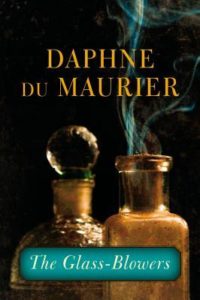 THE GLASS-BLOWERS
by Daphne du Maurier

“The world of the glass-blowers has its own traditions, it’s own language – and its own rules. ‘If you marry into glass’ Pierre Labbe warns his daughter, ‘you will say goodbye to everything familiar, and enter a closed world’. But crashing into this world comes the violence and terror of the French Revolution, against which the family struggles to survive.

Years later, Sophie Duval reveals to her long-lost nephew the tragic story of a family of master craftsmen in eighteenth-century France. Drawing on her own family’s tale of tradition and sorrow, Daphne du Maurier weaves an unforgettable saga of beauty, war, and family.”

From the 1963 hardcover edition:

“The most serious work of one of our enduringly popular novelists, THE GLASS-BLOWERS is Daphne du Maurier’s dramatic story of a family of master craftsmen in France from the time of the Ancien Regime to the ascendancy of Napoleon. It brings to life an aspect of the French Revolution seldom touched on in historical fiction–the Civil War which originated in the Vendee and swept up to engulf the Midi.

Mathurin Busson, a proud master glass-blower, created a crystal goblet in honor of Louis XV, so perfect it defied all attempts at duplication. It came to symbolize the heritage he passed on to his five children: Robert, the eldest, a charming but hopelessly irresponsible opportunist; Pierre, a dreamer with no head for business; Michel, embittered by a speech impediment; Edme, ad idealist hampered by the body by not the restraint of woman; and Sophie, from whose point of view their story is compassionately told.

In a powerful evocation of the inhumanity of war, Miss du Maurier tells how the lives of the Bussons were violently and permanently altered by the French Revolution and the Civil War which followed it.

In preparation for THE GLASS-BLOWERS, Miss du Maurier spent many months in France capturing the background and feeling of these master craftsmen whose special world she recreates in this superb historical novel.”