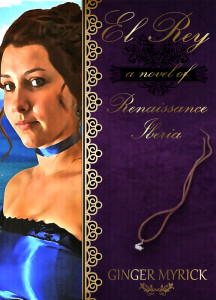 From Reader To Writer: The Evolution of Ginger Myrick – author of EL REY: A NOVEL OF RENAISSANCE IBERIA

When I was about twelve, I found an old box of books in my grandmother’s closet. I had outgrown the material deemed appropriate for girls my age, so I eagerly cracked open the carton to see what new and exciting treasures the literary world had to offer. KATHERINE by Anya Seton was the book on top and my first experience with historical fiction. At first the language was odd with an old-fashioned cadence and expressions I had never heard before, but it soon became familiar and effectively plunged me into the world of knights and ladies and everything a little girl dreams of. I was captivated by the love between Katherine and John of Gaunt, which was inspirational without sounding like a fairytale. Anya Seton made them human with human flaws and shortcomings, yet I still rooted for them, cheered at their triumphs, cried for their losses, and hoped beyond hope that they would wind up together. The Plantagenets were like a family of golden gods to me, and when I had done with KATHERINE, I returned to the box and moved on to the Jean Plaidy books within. Starting with her trilogy about William the Conqueror, I read them in sequence, moving forward through time, seeking to learn everything I could about the glittering dynasty, which still fascinates me today. These books were magical and eye-opening and left me with a life-long passion for this intriguing blend of fact and fantasy. I read in the genre almost exclusively when I was teenager, relieved only now and then by a healthy dose of Stephen King or Ayn Rand. Even today, though I consciously vow to read more contemporary books, I always return to my old literary comfort food. And now I have ventured one step further. I have written my own historical novel!

Unbeknownst to me, John of Gaunt’s bid for the crown of Castile left a lasting impression on my subconscious mind. In addition to Seton’s arresting description of his dark allure and leonine eyes, to me he was every inch the daring hero. What audacity to cross the ocean with his own army intent upon winning the crown of a foreign kingdom! He married two of his daughters to the thrones of Castile and Portugal to secure his legacy, and the resulting Treaty of Windsor between Portugal and England is still in place today and the longest standing diplomatic alliance in history. In fact, it was when I was in a forum about KATHERINE that I had the inspiration for my book, EL REY: A NOVEL OF RENAISSANCE IBERIA.

I was exploring an idea for a short story about a Welsh girl growing up during the reign of King Henry V of England (grandson of John of Gaunt and yet another Plantagenet!) I had spent the day scouring old folklore books, because I wanted to add an element of magic to her tale. I needed a break from the legends of the fair folk, Merlin’s prophesies, and superstitions of the time, so I turned on the computer to search for a new recipe or knitting pattern. I was reading some posts about my old favorite, and the entire storyline for EL REY flashed into my mind in what I can only call ‘Divine Inspiration’. It took a couple of days to pinpoint a suitable location and significant events that fit the setting, but for the most part, the story flowed out of me like water from a spring. The biggest challenge was finding the time to write it all down.

When I finished my book and was so very pleased with it, I started the tedious process of sending out queries. I assumed that writing a 500-page, historically accurate novel would be the hard part. What a rude awakening! The marketing and promotion is the beast. In addition, to heartbreaking rejection at every turn, you are exposed to the not-so-kind public who offer advice (most of it unsolicited) on how to improve your work. You try to keep in mind that the majority of people are only trying to be helpful, but it doesn’t make you feel any better as they tear your baby to pieces. I’ve had readers say that EL REY is too long, that the historical backstories are intrusive and need to be cut. What I really need is someone to champion EL REY and a like-minded group of ladies who love the same types of books and are not afraid to make an emotional investment. Every book has an audience, a writer just has to find it.

On the other hand, you occasionally run across someone who really understands your book and gets what you are trying to accomplish. I had a reader write to me comparing Inez and Estevao to Jane Eyre and Rochester. She said that the characters were engaging, the setting authentic, and the story addictive. This is the highest form of praise and a writer’s greatest reward. Suddenly all of the criticism seemed like a distant memory and my heart swelled with pride.

When I decided to move on from EL REY, I was saddened and had difficulty putting the story away, in part because the characters were real to me, and I had grown so fond of them. Another part of it, I realized, was because I had become so completely immersed in that other world and would no longer be able to take refuge from my everyday life there. After a period of bereavement, I prepared to go ahead with my new idea. Suddenly, faced with the blank page before me, a small shadow of doubt crept into my mind. Could I do it? Would I be able to create another world as enchanting as the last where readers could lose themselves in the past, again? This is a fear that assails me upon returning to my desk any time I have spent a substantial length of time away from it. Of course, as soon as my fingers hit the keyboard I surrender myself to the story, and it all comes rushing back. I had thought this new talent to be a temporary gift only good for my Magnum Opus, but I now understand that although the odds are against it, on occasion, lightning does strike twice.

In closing, I would like to thank Arleigh with all my heart for the platform. Running a site like this is truly a labor of love. I would also like to thank you readers out there who keep the dream alive and make it all possible. Without you, there would be no point. I will leave all of you with a final, earnest plea to continue to let your imagination run wild. You never know where it might lead…Oh, and don’t forget to write it all down! 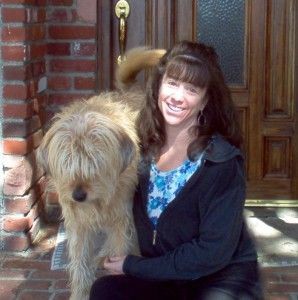 Ginger Myrick was born and raised in Southern California. She is a self-described wife, mother, animal lover, and avid reader and knitter. Along with the promotion for EL REY, she is currently crafting her second novel, which takes place during the U.S. Civil War. She is a Christian who writes meticulously researched historical fiction with a ‘clean’ love story at the core. She hopes to persevere with her newfound talent and show the reading community that a romance need not include graphic details to convey deep love and passion. Although having researched, written, and self-published her first novel, EL REY: A NOVEL OF RENAISSANCE IBERIA, in just under two years, she still does not consider herself a writer.

“Continuing in the tradition of classic period romance writers, such as Jane Austen, the Bronte sisters, and Anya Seton, EL REY: A NOVEL OF RENAISSANCE IBERIA is the stunning new work of historical fiction by Ginger Myrick. Set against the backdrop of 16th century Portugal and Spain at the dawn of the dynamic Age of Exploration, EL REY boasts an inspiring cast of courageous characters that will touch your heart and capture your imagination. At its core is the turbulent love story between Inez García and El Rey.

Inez is the outspoken, independent daughter of a wealthy merchant who fled the Spanish Inquisition and a domineering mother of English noble stock with secrets of her own. At a dinner party in his honor, she falls in love with El Rey, a dashing, charismatic sea captain with a golden voice who has spent his life expanding the Portuguese empire. He is nephew of the King of Portugal with blood ties to the illustrious royal houses of Castile’s Queen Isabella and England’s King Henry VIII.

Inez and El Rey strike up an immediate friendship and discover that they have much in common. Inez has spent her childhood in the shadow of her beautiful elder sister, Serafina, so when El Rey befriends her based on her own merits, she vows that she will never love another. Captivated by her spirited charm and mesmerized by her bewitching silver and gold eyes, El Rey promises to one day return and ask for Inez’s hand in marriage. Though misfortune, class prejudice, and El Rey’s foolish pride conspire to keep them apart, life’s disappointments only make Inez more determined to seek out the elusive happiness in which she has never stopped believing.

But it is much, much more than just a love story.

EL REY is a sweeping family saga reminiscent of Colleen McCullough’s The Thorn Birds or Philippa Gregory’s books about the royal dynasties of England. Interwoven in the main body of the work are four meticulously researched narratives representative of the time. Spanning three continents and two centuries in the history of the warring kingdoms of medieval Portugal and Castile, the vignettes chronicle the heroic struggles of three families to overcome racial discrimination, murder, plague, war, and the Spanish Inquisition. Filled with food and travel, and tempered with humor, tenderness, and tragedy, this intriguing story tells the timeless tale of the triumph of true love and the resilience of the human spirit.

EL REY has something in it for everyone. You will laugh, and you will cry. No one who reads this book will remain unaffected.”