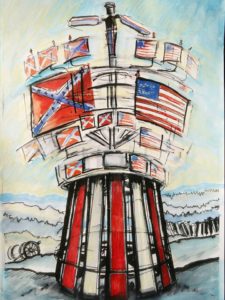 I decided to base Whirligig, my novel set in the American Civil War, largely in Tennessee and Georgia. The battles around Chattanooga were interesting to me. I only knew of Chickamauga and the subsequent epic charge up Missionary Ridge in summary, but I liked their relative anonymity when compared to the better known eastern battles of Gettysburg or Sharpsburg. I thought it would allow me room to manoeuvre. We do that as writers: try to find space for our fiction.

Whirligig follows the fortunes of Shire, an English immigrant sucked into the war and into the ranks of the formidable 125th Ohio Infantry. He has a love interest and a duty to reach Appalachian Tennessee. But in order to keep his promise he has to fight through the great battle of Chickamauga. The challenge for me was seeing how closely I could align Shire’s fictional story with the history that I also wanted to illustrate.

How should a writer choose which history to remain faithful to and which to overlook, or even bend, to support a story? I used to be inclined more towards historical purity; I was brought up not to break the rules (very English). But a writing degree and the experience of producing my first novel, Whirligig, has softened me towards the storyteller’s way of thinking.

Chickamauga is named for a creek that winds its way north around the battlefield. It’s a Native American word, claimed to mean ‘River of Death’. The name may derive from when the Indians sought relief in the water from smallpox, long before the battle. There is some debate over the exact meaning and whether its roots are in Cherokee or Shawnee. Both tribes were driven west and each had a time here. So historically and linguistically its origin is not settled. Most likely, when the ‘translation’ was first used in accounts after the battle, it was too good a story not to repeat. It seems to imply some mystical Indian foresight that, sooner or later, this place was destined to have a bad day. It would have been easy for me to use this tale in the novel, but I chose not to. I felt it would have been to imply something that wasn’t true. But why the qualms? After all, I’m a fiction writer. 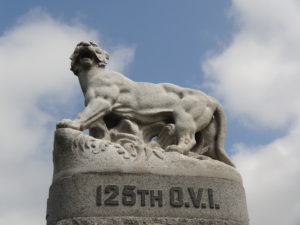 Most of the novel is told through the eyes of fictional characters, particularly the main protagonist, Shire. When it came to the battle, I needed to employ someone else and I used the very historically real Colonel Emerson Opdycke. Opdycke and other members of the 125th Ohio (bless them) left behind a goodly amount of first hand writing. I used Opdycke not only because he’s an interesting historical character, but because I felt I needed someone of higher rank who would have access to a broader view of military events. I wanted to tell Shire’s emotive fictional story in the 125th, but I also wanted to tell the true story of the 125th in the battle and the war. It was tricky. If badly managed, the story and the history might conflict.

Writers have a choice as to how much of the historical record to remain faithful to. Imagine at one end of a spectrum a writer sticks 100% to historical fact. The writer is now a historian. At the other end is 100% fiction. The writing now has no basis in history at all. I found it useful, when considering my own approach, to place other novels on this scale.

Michael Shaara’s ‘The Killer Angels’ is heavily towards the historical end of the spectrum. The book is entirely concerned with the battle of Gettysburg and uses, almost exclusively, real historical figures. The fiction lives in how Shaara portrays these characters, in his slant on how they might have behaved, but the plot of the book is the history of the battle.

Nearer the fiction end of the spectrum would be Stephen Crane’s ‘The Red Badge of Courage’. He concentrates on the experience of a fictional private in his first battle. For the most part the protagonist is referred to only as ‘the youth’ rather than Henry. And his comrades are given similar tags: the tall soldier, the loud soldier. We are never told where the battle is. Crane deliberately keeps character and place anonymous so we focus on the youth’s perceptions. And it works to evoke an incredibly vivid and personal experience.

Putting Whirligig on the spectrum, I would put it somewhere in the middle. While the fictional characters are more important to the story, I use the real figure of Colonel Opdycke to assist in scaling and understanding the battle and the war.

Where any writer might find themselves on my imagined spectrum reflects how they deal with more precise questions, questions about where they feel the line between history and fiction should be. Most writers wouldn’t entertain any significant changes to history. They would agree that real people must have their real outcomes. Dates should be stuck to, the weather, the combatants. There’s some sort of tacit pact in handling known historical facts or reasonable conjecture. But how to deal with what people said? This is rarely known. And what if, for the sake of your story, you wanted someone to go somewhere they didn’t? I’ll admit that my Colonel Opdycke roamed more widely on the battlefield than his letters would suggest. I needed him to be close to the decision makers, to be a witness for history. So I can’t deny gently bending history to suit the story.

Some argue that sticking too tightly to the dry facts can actually work us away from the human experience. As writers we should instead be encouraging and underpinning imagination. Facts are external; truth is internal. Ultimately, it’s a personal choice. For me, an extra thick, red line is that my regiment, the 125th, can only go where it really went during the battle and achieve what it really achieved. Shire’s fictional story has to conform to that.

There is an alternative route to a different sort of truth through realism, using believable detail to invoke an authentic experience. Museums have artefacts in abundance, but it was out on the battlefield that I gained the most. Bravely (for me) I returned alone to the battlefield at dusk and wandered in and out of the trees. I saw a silhouetted beetle whose freedom Shire envied the night before the battle, ‘He followed its escaping silhouette across the last, thin stripe of a pale yellow sunset.’ I listened to the crickets and the frogs, stroked a cannon that had held its warmth from the hot day. At a re-enactment in Resaca I watched the cannon smoke pool in the grass as it must have done a hundred and fifty years ago, ‘Touched by the lightest of breezes, patches rose up to twist slowly in the air, like so many new wraiths searching for a different world.’ It’s a very different sort of connection to dry historical facts.

I was in Franklin, Tennessee, for the 150th anniversary of its battle. I met the 125th Ohio re-enactors, all in period uniform, all role-playing with a thousand other soldiers. It got me thinking about their own relationship with history. In many ways they weren’t so different to writers: imagining and experimenting at how things might have been, inevitably falling short, but enjoying the process. But whether you are re-enacting or writing, weaving a new story into history is a deep pleasure in its own right. 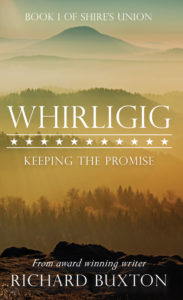 “Shire leaves his home and his life in Victorian England for the sake of a childhood promise, a promise that pulls him into the bleeding heart of the American Civil War. Lost in the bloody battlefields of the West, he discovers a second home for his loyalty.

Clara believes she has escaped from a predictable future of obligation and privilege, but her new life in the Appalachian Hills of Tennessee is decaying around her. In the mansion of Comrie, long hidden secrets are being slowly exhumed by a war that creeps ever closer.

The first novel from multi-award winning short-story writer Richard Buxton, Whirligig is at once an outsider’s odyssey through the battle for Tennessee, a touching story of impossible love, and a portrait of America at war with itself. Self-interest and conflict, betrayal and passion, all fuse into a fateful climax.”