Attention biblical fiction fans: You’ll not want to miss this guest post and giveaway on V. G. Kilgore’s debut novel, Obedience. This is a story of Noah’s Ark based on Noah’s son, Ham. See the giveaway details at the bottom of the post. 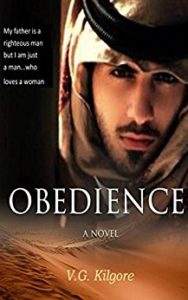 Biblical fiction has intrigued me from the time I was a good, church-going teenager, to my current lapsed state. The Bible and other holy books have affected all of us for centuries, regardless of our beliefs.

Our bodies might not be much changed from the Bronze Age, but thankfully, our cultural evolution continues. It’s important to consider these ancient stories with a more enlightened perspective.

With Noah’s Ark, on which Obedience is based, Noah’s son Ham has been accused of everything from simple tattling to incest and mutilation. With the Curse of Ham, his example has been used to justify racial division, conquest and slavery for millennia. It’s a story that cries out for new thought and more sources than the Bible for context.

For slavery or America’s “peculiar institution,” as it was known, we were taught since middle school that it was a gradual process, with indentured servitude developing into lifelong bonds.

Noah has servants unable to repay debt, going into its third generation. Technically though, they’re servants, not slaves—servants considered of lower status, servants who can be tasked with dangerous assignments others won’t risk, and servants who can ultimately be summoned to his bed—until the curse aimed not at Ham, but his youngest son, that reverberates through all cultures and history to the present day.

Something else that we might have in common is possible climate change. What was the environmental impact of uprooting all the trees over decades to build the Ark? As the farmer in the family, Ham is bothered by the stripping of the land and the resultant heat, drought and insects. The lack of concern for how their actions affect the world is, according to him, the “great, collective sin”.

A Muslim friend told me about Ashura pudding and her religion’s tradition that Noah and his family made one with the provisions they had left when the Ark finally found land. It not only added multi-cultural heft to the story, but also allowed for a romantic interlude between Ham and his wife. (I’ll leave that to the reader’s imagination.)
As a seat-of-my-pants writer, I don’t do a great deal of research in advance, but insert information as I go along. When I got to the subject of Noah’s Vineyard, I found a wonderful rabbinic tale or midrash, about Lucifer “helping” Noah with his planting and using the blood of a lamb, lion, monkey and pig to fertilize the soil.

According to my handy college dictionary, midrash is the Hebrew word for explanation and is defined as “commentaries and explanatory notes on the Scriptures written between the beginning of the Exile and c 1200 A.D.” In other words, biblical or Talmudic fiction. With few written records from that era and the centuries before, writers who want to explore that period must rely not only on the scripture, but previous books that tackled the subject.

How Far to Bethlehem by Norah Lofts, Anita Diamant’s The Red Tent, Taylor Caldwell’s Dear and Glorious Physician, and Joseph and His Brothers by Thomas Mann are some of my favorite biblical fictions and sources. Through them I gleaned not only the few available facts, but the proper tone and confidence to create an unknowable era, make it believable, and apply our understanding to the questions not answered in Sunday School.

While writing Obedience, I couldn’t help but wonder if I might ever inspire someone to do the same.

“Ham is a man of passion and questions. He’s adored his wife, Lita, since he first saw her draped in her father’s fishing nets and threatened to leave with her if his father, Noah, didn’t allow the marriage. She becomes his greatest comfort when Ham is at odds with his father and brothers.

When Noah claims their God has commanded him to build an Ark to escape a devastating flood, Ham worries about the construction stripping the land and the community’s ridicule of the family. He and Lita draw closer together as outsiders. They’re shocked when the rains come and the entire family is forced into the Ark, along with the animals that appeared.

Confinement and uncertainty of fate amongst the refugees exaggerate normal family tension, rivalries and forbidden love. On land, they feel independent and invincible, chosen by their God to survive and thrive. But for Ham, there’s tragedy and more doubt. Noah warns him he must yield his will, lest there be even graver consequences. Ham can’t imagine anything worse and careens down the path that forever links him with depravity and harsh judgment.”