Please welcome author John R. Bell today with a guest post about his WWII novel, The Circumstantial Enemy, and one copy of the book up for grabs! 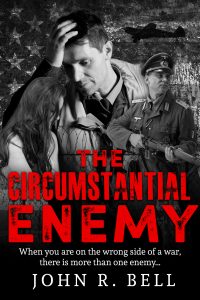 “If you don’t write it, Grandad’s story will be lost forever,” My daughter said.

I’ll never forget the yearning in her eyes. That was 17 years ago. Grandad was 80 at the time. He’s now 97. The family had heard his war stories over and over again. Fascinating tales of trials and tribulations. As a young Yugoslav air force pilot, he was coerced onto the wrong side of WWII with the German invasion of 1941. They dispatched him to the Russian front – from there to surveillance over the Adriatic Sea where he would parachute into the frigid waters with 3 bullets lodged in his body – after that, unsanitary Italian hospitals, North African detention centers, and finally POW camps in Illinois and Louisiana where he would spend the rest of the war. Yet his troubles were far from over. Upon repatriation, he became an enemy of the state in Tito’s newly-created communist regime.

After hours of historical research and interviews with Grandad, I self-published his biography and printed enough copies for the family and a few generations to come. I thought I was done as an author. That was not the case. My career as a CEO of a Fortune 500 company had come to an end with the sale of the company. On my back as I bailed from the corner office was another type of parachute, a golden one. Though financially secure, I was too young to retire, so I decided to reinvent myself as a corporate strategy consultant. That career shift resulted in plenty of travel and lonely nights in hotel rooms.

How would I use all of that down time? I began blogging about leadership, strategy, and branding on my website CEOafterlife.com – pumping out a blog every week. A hundred blogs later, I thought back to Grandad’s story. Could I fictionalize that tale into a thrilling novel? I thought I could. But after penning a few chapters of what would become The Circumstantial Enemy, I was struck by my naivety. I knew nothing about writing fiction. Eager to learn, I didn’t write a word for a year because I threw myself into books about how to write fiction and historical fiction. My next mistake was penning a manuscript of 225k words. When everyone and their brother said it was too long, I cut it back to 180k. Then another 40k went into the fireplace before literary agent Eric Nelson agreed to offer advice.

Though he loved the story, Eric said I needed better structure and focus. He also said he was shifting his own focus to the lucrative business book market. I said that I could write a business book for him. Nine months later, Do Less Better: The Power of Strategic Sacrifice in a Complex World was released by Palgrave Macmillan USA.

Do Less Better was an easy transition from blogging. Writing fiction was another story. It became the biggest challenge of my CEO afterlife. Eight years ago as a retiree I began The Circumstantial Enemy. I had the first draft complete in 2 years. I needed another 3 years for rewriting and editing as well as checking the historical facts and all those little details of the 1940s that had to be correct – a 100% correct. And then there was another 3 years of trying to persuade bona-fide publishers to take on the project. In the end, my persistence paid off.

More than 20 years have passed since I left the corner office. It seems like half that long. Much has changed, including me. Somehow I reinvented myself. Transformation is never easy. Reinvention never happens without passion, determination and hard work. At 71, I am a rookie historical novelist. More importantly, I’m just another example of an everyday guy getting out of life what he’s putting into it. 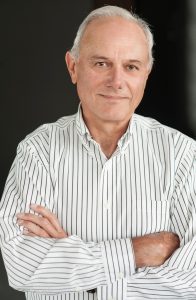 John Richard Bell was born in Chigwell, UK and now resides in Vancouver, Canada. Before becoming an author of historical fiction, he was the CEO of a Fortune 500 company and a global strategy consultant. Based on a true story, The Circumstantial Enemy is an energetic journey to freedom through minefields of hatred, betrayal, lust and revenge. Rich in incident with interludes of rollicking humor, it’s a story about the strength of the human spirit, and the power of friendship, love and forgiveness.

On the wrong side of war, there is more than one enemy…

Downed by the Allies in the Adriatic Sea, Tony survives a harrowing convalescence in deplorable Italian hospitals and North African detention stockades. His next destination is Camp Graham in Illinois, one of four hundred prisoner of war camps on American soil.

But with the demise of the Third Reich, repatriation presents a new challenge. What kind of life awaits Tony under communist rule? Will he be persecuted as an enemy of the state for taking the side of Hitler? And then there is Katarina; in letters she confesses her love, but not her deceit… Does her heart still belong to him?

Based on a true story, John Richard Bell’s The Circumstantial Enemy is an energetic journey to freedom through minefields of hatred, betrayal, lust and revenge. Rich in incident with interludes of rollicking humour, it’s a story about the strength of the human spirit, and the power of friendship, love and forgiveness.

3 thoughts on “guest post & giveaway: The Circumstantial Enemy: The Truth Behind the Fiction”