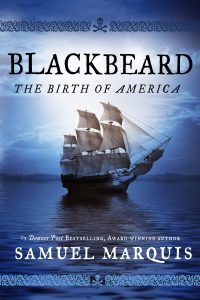 Who, Truly, Was Blackbeard, And From Whence Did He Come? Will The Real Pirate Commodore Please Stand Up?
by Samuel Marquis

In Blackbeard: The Birth of America, Historical Fiction Author Samuel Marquis, the ninth great-grandson of Captain William Kidd, chronicles the legendary Edward Thache—former British Navy seaman and notorious privateer-turned-pirate, who lorded over the Atlantic seaboard and Caribbean during the Golden Age of Piracy. A Robin-Hood-like American patriot and the most famous freebooter of all time, Blackbeard was illegally hunted down by Virginia Governor Alexander Spotswood, the British Crown’s man in Williamsburg obsessed with his capture. This year marks the 300th anniversary of Blackbeard’s death.

In becoming the Blackbeard of legend, Edward Thache of Spanish Town, Jamaica, has represented many different things to many different people since his death 300 years ago. To some he is a swashbuckling hero, to others a villain, to still others an antihero or something in between the two extremes. In his day, Blackbeard was portrayed as a “barbarous” monster by the pro-British newspapers and merchant elite—and known as a Robin-Hood-like folk hero defying the British Crown among American colonists.

He has been called as “grotesquely conspicuous a villain as can be found in the annals of crime” and a thief who perpetrated “the most abominable wickedness imaginable,” “carried out acts of mindless destruction,” and “committed more private murders than he could number on the fingers of both hands” despite the fact that he never killed a single person—until he was attacked by Lieutenant Robert Maynard and his 70-man British Royal Navy force at Ocracoke Island, North Carolina, on November 22, 1718. In that seminal moment in history, he happened to be greatly outnumbered and fighting with pistol and cutlass for his very life. To his legion of supporters, he has been called everything from a “canny strategist, a master of improvisation, a showman, a natural leader and an extraordinary risk taker” to “the boldest and most notorious of the sea rovers in the New World in the early 1700’s” to “the bravest and most daring corsair of them all.” One historian recently proclaimed, “Meaner or more evil characters existed, but none were as flamboyant, theatrical, and bold as Thache.”

But who was Blackbeard really, and from whence did he come? Fortunately, the last two decades have yielded a treasure trove of information that has yielded answers to these and other questions and, in the process, has radically altered the Blackbeard narrative. This recent research is based upon the marine archaeology of his legendary flagship, the Queen Anne’s Revenge; deed, marriage, and death records; court transcripts; and first- and second-hand accounts in British, French, Jamaican, and North and South American archives.

We now know, for instance, with a reasonable degree of certainty, that Edward Thache was born not far from Bristol, England, to an upper-middle-class, landowning family around 1687, but that he moved to Jamaica at a young age. According to maritime historian Baylus Brooks, author of Blackbeard Reconsidered: Mist’s Piracy, Thache’s Genealogy and Quest for Blackbeard: The True Story of Edward Thache and His World, genealogical research has demonstrated that “Edward Thache of Gloucestershire and/or Bristol” was “Blackbeard the pirate” and that he and “his family lived in Spanish Town, St. Catherine’s Parish, Jamaica” by around 1690. Additional records from British archives compiled by Brooks reveal that Thache served in the British Royal Navy, likely as an officer or similar elevated position befitting his social standing, aboard the HMS Windsor commanded by Rear Admiral William Whetstone.

The new conceptual model of the notorious Blackbeard is that he was not a ruthless cutthroat and martinet but was a loving and caring gentleman “born into an intelligent, respectable, well-to-do family” and “an educated man” on account of: his ability to read and write (he corresponded with merchants and colonial officials like North Carolina customs inspector Tobias Knight); his long-term amorous relationship with a beautiful Swedish woman named Margaret of Marcus Hook, Pennsylvania; his leaving his father’s entire estate to his Jamaican step-mother and her three children; his social grace (he was as at ease with governors and other high-ranking officials as he was common seamen); and his nautical skills (which required advanced training in mathematics and navigation). During the Golden Age of Piracy, captaining a large vessel such as a sloop or brigantine was a skill typically possessed only by those with some degree of wealth who had received a liberal education.

As many researchers have suggested, Blackbeard likely began his piratical career in late 1715 or early 1716 in response to an epic event that was the decisive factor that launched the Golden Age of Piracy. On July 30, 1715, a hurricane destroyed ten Spanish vessels headed to Spain through the Florida Straits. The sinking of the massive treasure fleet aroused the entire Atlantic community, and even the squeaky clean colonial governor of Virginia, Alexander Spotswood—who would go on to illegally hunt down the Jean-Valjean-like Blackbeard like Inspector Javert from Victor Hugo’s Les Misérables—wanted in on the action. Fishing treasure wrecks was a common activity along the American coast, including the American West Indies. There is a strong likelihood that Thache participated in, or led as a privateer captain, one of the small salvage parties from colonial America that appeared off the coast of Florida during the winter of 1716, to collect the “14,000,000 pesos in silver, and significant quantities of gold” spilled from the Spanish treasure galleons wrecked in the hurricane the previous summer.

Thache joined either Jamaican privateer Henry Jennings or his rival Benjamin Hornigold to fish these ten wrecks, and he did so, according to Brooks, with a barely legal commission “signed by the governor of Jamaica” that was “disputed by both Spain and the Crown until that governor was finally removed.” By 1717, Thache and the other ex-privateers were expelled by new Crown authorities from Port Royal and helped nurture a governmentless pirate republic on New Providence, Bahamas. Thus began Thache’s transition from legitimate privateer-seaman to prowling sea rover, and it was only a matter of time before he became the fearsome Blackbeard the pirate, taking British, French, and Spanish prizes with equal enthusiasm and alacrity.

The rest of his short-lived piratical career is reasonably well-documented by history—but with some interesting surprises. He went on to capture more than thirty vessels (most likely a minimum number) along the Atlantic seaboard, Caribbean, and the Spanish Main, and at the peak of his swashbuckling career in April 1718 he served as commodore of a 700-man, five-ship, 60-plus-gun pirate flotilla that rivaled the strength of any pirate fleet in history and included the 200-ton ship-of-war Queen Anne’s Revenge. But what most people don’t know is that the image of Edward Thache that we have all come to know—in other words, the cruel and ruthless villain portrayed in Pirates of the Caribbean, Crossbones, and Black Sails that never actually existed—was largely created by the leading “fake news” promulgators of his day. These included the newspapers in London and America (particularly the pro-British Boston News-Letter), the British Board of Trade, colonial governors like Virginia’s Alexander Spotswood, and Captain Charles Johnson’s (Nathanial Mist’s) A General History of the Robberies and Murders of the Most Notorious Pirates, first published in 1724 six years after Blackbeard’s death. As Blackbeard historian Arne Bialuschewski states about the latter: “This book has been plundered by generations of historians, despite the fact that it is riddled with errors, exaggerations, and misunderstandings.” Unlike my ancestor Captain William Kidd (I am his ninth great-grandson on the Marquis side of my family), whom famous pirate writer-illustrator Howard Pyle said should be “relegated to the dull ranks of simply respectable people,” Blackbeard has attained a mythical status largely from the propaganda created in his own lifetime and shortly afterwards.

The real Blackbeard, of course, never physically harmed anyone until the day he was battling for his life (he was reportedly shot five times and stabbed more than twenty times before he finally fell from being decapitated by a seaman’s cutlass). With regard to Blackbeard’s purported cruelty, violent disposition, and murderous nature, there is not one iota of evidence to support the Thache-as-a-murderous-Edward-Low narrative. Unlike the later pirate captain Low, who tortured and killed his victims in ways that would make Hannibal Lecter squirm, Thache typically showed his victims respect and let them down easily after taking their ships as prizes, giving them vessels in trade, food and provisions, and even receipts for merchandise. In an age when violence was commonplace, he did no more harm to captured ship captains than to detain them for a brief period of time. As Bialuschewski states: “I haven’t seen one single piece of evidence that Blackbeard ever used violence against anyone.” Colin Woodard, author of The Republic of Pirates, concludes plainly, “Blackbeard was remarkably judicious in his use of force. In the dozens of eyewitness accounts of his victims, there is not a single instance in which he killed anyone prior to his final, fatal battle with the Royal Navy.”

But once pro-British colonial newspapers like the Boston News-Letter and various pamphlets began presenting biased accounts of Blackbeard and his fellow gentlemen of fortune’s attacks on merchant shipping, providing readers in the New World with embellished accounts of vicious behavior and horrific details of pirate life, Edward Thache of Spanish Town, Jamaica, was living on borrowed time. All it took was a single highly motivated and relentless colonial governor named Alexander Spotswood to put an end to him and his motley crew once and for all.

But what Spotswood hadn’t counted on was that in his efforts to destroy Blackbeard, he more than anyone else secured the man’s place in the pantheon of great American antiheroes, and as history’s most illustrious pirate and one of its most colorful characters. In the end, few people remember or care about the governor who hunted the pirate commodore down—but virtually everyone knows the name Blackbeard. To this day, 300 years after his death, he is the only pirate who remains a household name. And the truth is, he has earned it. The privateer-turned-gentleman-of-fortune who did not kill a single soul until the day he was illegally trapped, murdered, and beheaded; who graciously bequeathed his family inheritance to his step-mother and half-siblings; who desperately loved a Swedish woman named Margaret of Marcus Hook; who freed a black African slave named Caesar and made him a seaman drawing equal shares aboard his ships along with numerous other free black men; and who viewed himself and his motley crew as Robin Hood’s Men and patriots combatting British oppression deserves his immortality.

Such is the real Blackbeard, and that is from whence he came. 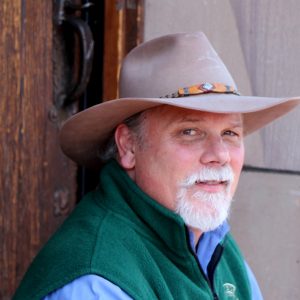