In celebration of Mother’s Day, I have selected three mothers from literature I have read, each decidedly different from the other. We have an exemplary step-mother of ten, a well-intentioned, but delusional doting mother of five, and a grandmother bent on scheming and revenge. The latter may not be what’s expected of a holiday post, but let’s be honest: in fiction, there are very few protagonists with perfect parents. In fact, it’s fairly common for writers to use a dysfunctional home life as the catalyst for interesting characterizations. Along with the social team at RedEnvelope (who were an inspiration in writing this post), to my own mother, Carol, who instilled in me a love of reading, I dedicate the following trio: mother, step-mother and grandmother, forever immortalized in the written word! 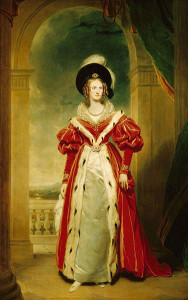 Adelaide, Duchess of Clarence
Victoria in the Wings by Jean Plaidy

Adelaide, Princess of Saxe-Meiningen and later Duchess of Clarence and Queen Consort of William IV, entered into an arranged marriage with the third son of the King of England in hopes of producing legitimate heirs to the throne. The Prince Regent had only one daughter, who died giving birth, and the second son of the king, Frederick, had no children, making it most important for William to marry. He’d been in a long-term relationship with an actress, Dorothy Jordan, producing ten illegitimate children, but had to give her up for his duty to the country. Expecting a dour-faced and disagreeable German bride, he found instead a humble, pleasing (though plain) young woman who had no qualms in spending her honeymoon nursing his son back to health after a riding accident. She took to all of his children and treated them as her own. One scene shows Adelaide re-hanging the portrait of Dorothy Jordan in their home after she finds it hidden away and later, after William asks why she done this, she answers:

“I can only take the place of the mother they have lost if they need me and it shall be my pleasure to be that. She is their true mother. They will never forget it, nor must we wish them to. So….the picture will hang in its old place.”

Sadly, Adelaide lost all of her own children, either in infancy, stillbirth or premature labor. Still, she was an excellent step-mother, supportive of all ten children, though the King and Queen of England (and many other nobles) declined to recognize them as family. Of Plaidy’s Georgian Saga, Victoria in the Wings (#11) quickly became my favorite after the introduction of Adelaide. 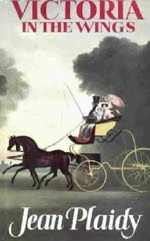 VICTORIA IN THE WINGS

“With King George III under lock and key suffering from perceived insanity and the Prince Regent in ill health, all eyes are on the Regent’s pregnant daughter. Unfortunately, the unthinkable happens and both Charlotte and her baby die in childbirth, leaving the age old problem of succession. For though King George III has many children, all are middle-aged and none have legitimate heirs to secure the Hanoverian dynasty.

The death of Charlotte causes a sudden enthusiasm for marriage among the sons of George III, as they compete to have children and secure their line of succession. William marries Adelaide of Saxe-Coburg Meiningen while Edward marries Victoria Mary Louisa of Saxe-Saalfeld-Coburg. Another son, Ernest, is already married and he too hopes to be the one to provide necessary children. King George dies, to be replaced by an ailing George IV, and Edward and Victoria succeed in having a daughter, also named Victoria. She waits patiently to become Queen, avoiding the plots, intrigue and danger that threaten to prevent her reaching maturity.”

Probably the most well-known mother among my reading groups is the indefatigable matchmaker, Mrs. Bennet (first name was not divulged by the author). While she may not win the Mother-of-the-Year award for sending Jane, her eldest, off to the Bingley’s place in the rain hoping she’d catch a cold, it was done with the best of intentions. If she were called brass, loud and seemingly ill-breed, Elizabeth would step up to her defense in an instant, even knowing the truth of the statement, because, well, it’s her mother! Mrs. Bennet has long been an interesting character for me. In the plethora of P&P variations that I have read (which is nearly 40, just a small percentage of what’s out there) I have not come across one yet that is told in her perspective. Her plight is simple: She has no sons to inherit. Her home is entailed to an obscure relative who has no connection to her immediate family. She must get her daughters married, and married well, if they are to have the gentile life to which they’re accustomed after Mr. Bennet passes. And so she’s become obsessed with finding single men in possession of good fortunes in want of a wife.

“If I can but see one of my daughters happily settled at Netherfield, and all the others equally well married, I shall have nothing to wish for.” Chapter 3

(from the 2005 film)
Elizabeth Bennet: [On Marriage] Is that really all you think about?
Mrs. Bennet: When you have five daughters, Lizzie, tell me what else will occupy your thoughts, and then perhaps you will understand.

And, from the Austen-inspired novel I have chosen to highlight in this post, Mr. Darcy and the Secret of Becoming a Gentleman by Maria Hamilton:

Mrs. Bennet to Miss Bingley on marriage: “Not everyone understands what a heavy burden a mother carries in this regard. A daughter’s future is made by her marriage, and it is up to a mother to ensure that she secures the best place she possibly can.” 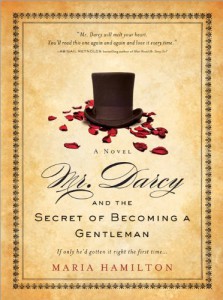 MR. DARCY AND THE SECRET OF BECOMING A GENTLEMAN

“When Elizabeth Bennet refuses his hand, Darcy is devastated and makes it his mission to change. By every civility in his power, Darcy slowly tries to win her affections, but Elizabeth is not easily swayed. Darcy vows to unlock the secrets that will make her his. He curses himself for his social awkwardness and appearance of pride, and sets out to right the wrongs he’s done her family.

Elizabeth’s family and friends misunderstand his intentions, and being in Elizabeth’s presence proves to be both excruciating for the shy Darcy-and a dream come true. For the first time in his life, he must please a woman worth having, and the transformation leads him to a depth of understanding and love that he never could have imagined.” 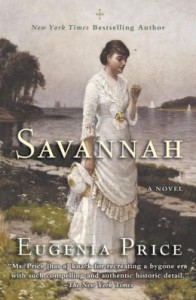 And, finally, we are to the least appealing mother figure–the disgruntled grandmother, Ethel Cameron. Last year I started the chunky Savannah quartet by Eugenia Price and have since read the second, and plan to begin the third soon. As a Georgia native, the story appealed to me, and even more so when I found that many of the characters are based known settlers of the area I am from: the Cherokee lands of NW Georgia (a subject explored in To See Your Face Again).

Ethel’s only son and her daughter-in-law died of an illness shortly after their daughter, Caroline, was born. Thus the child was raised by Ethel and her husband, Jonathon. However, Caroline took to her grandfather and vehemently disliked her grandmother, who treated her husband with contempt. You see, they had an arranged marriage and never really connected. He ended up taking a mistress and was scorned by Ethel to the end. Ethel, however–with the help of the Savannah series’ hero, Mark Browning–became very close to her great-granddaughter, Natalie. Though ending her part of the story with a somewhat questionable scene, Ethel did try in her own way to relate to her granddaughter and great-granddaughter. Readers will not remember her too fondly as a motherly-type.

“Do you know he’s the only person I’ve ever heard say a good word for old Ethel Cameron? Even Mama, who’s always telling us not to be nasty about anyone, isn’t too awfully kind to her. Why does Ethel Cameron hate nice Mr. Cameron so…”

“Ethel Cameron still seemed unaware that they were standing there. For longer than Mark believed possible, knowing his wiggly daughter, he watched the woman enfold the child, her jeweled hand stroking, stroking the back of Natalie’s curly…”

If you enjoy family sagas and you’ve not added this series to your TBR, you should do so now! The books are available in newly designed paperbacks and in eBook form.