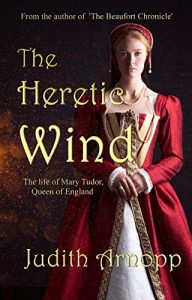 Adored by her parents and pampered by the court, the infant Princess Mary’s life changes suddenly and drastically when her father’s eye is taken by the enigmatic Anne Boleyn.

Mary stands firm against her father’s determination to destroy both her mother’s reputation, and the Catholic church. It is a battle that will last throughout both her father’s and her brother’s reign, until, she is almost broken by persecution. When King Edward falls ill and dies Mary expects to be crowned queen.

But she has reckoned without John Dudley, the Duke of Northumberland, who before Mary can act, usurps her crown and places it on the head of her Protestant cousin, Lady Jane Grey.

Furious and determined not to be beaten, Mary musters a vast army at Framlingham Castle; a force so strong that Jane Grey’s supporters crumble in the face of it, and Mary is at last crowned Queen of England.

But her troubles are only just beginning. Rebellion and heresy take their toll both on Mary’s health, and on the English people. Suspecting she is fatally ill, and desperate to save her people from heresy, Mary steps up her campaign to compel her subjects to turn back to the Catholic faith.

All who resist will face punishment for heresy in the flames of the Smithfield fires.