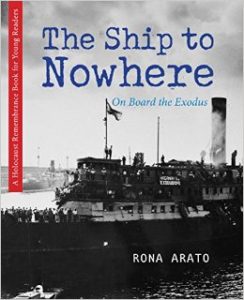 The Ship to Nowhere
by Rona Arato

“Rachel Fletcher is nine years old when she, her mother and sister are crammed on board the Exodus, a dilapidated vessel smuggling 4500 refugees of the Holocaust to their biblical homeland, Israel, known as Palestine. Since the end of the war, Rachel has been shuffled between a series of displaced persons camps, in many ways still a prisoner. Desperate, the refugees are willing to risk their lives again for a home free from hatred and oppression. But Jewish immigration to Palestine was very limited at this time, and they are surrounded by war ships. Nonetheless, Rachel and the other refugees refuse to give up hope. Their fight, and the world-wide attention it brought, influenced the UN to vote for the creation of the state of Israel. Made famous by the Paul Newman film Exodus, this is the first book for young people about the famous ship.”