I’m eager to read this–I loved the first two in the series and there’s already 172 mostly 5 star ratings on Amazon! Last year I wrote an article on the series, which you can read here if you’re a member of the Historical Novel Society. Serafina and the Twisted Staff ended on an interesting note, and I can’t wait to find out what happens in Book 3!

If you haven’t viewed the book trailers for these books, you can do so here. They are so realistic that many people have thought they were actual previews of Serafina movies. The author’s daughters are featured in the videos. 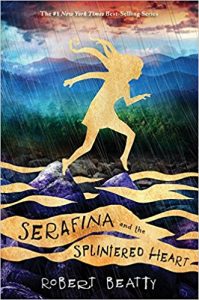 Serafina and the Splintered Heart
by Robert Beatty

The storms are coming… Something has happened to Serafina. She has awoken into a darkness she does not understand, scarred from a terrible battle, only to find that life at Biltmore Estate has changed in unimaginable ways. Old friends do unthinkable things and enemies seem all around.

A mysterious threat moves towards Biltmore, a force without a name, bringing with it violent storms and flooding that stands to uproot everything in its path. Serafina must uncover the truth about what has happened to her and find a way to harness her strange new powers before it’s too late.

With only days to achieve the impossible, Serafina fights to reclaim herself as the Guardian of Biltmore, friend of Braeden, daughter of her Pa, and heroine of the Blue Ridge Mountains and all the folk and creatures that call it home.

In the epic third installment of Robert Beatty’s #1 New York Times best selling series, Serafina takes her rightful place among literary champions as she battles fiercely to defend all she loves and become everything that she is meant to be.