I just purchased this for a reference book on a historical figure I am studying. There’s not much out there on this interesting early 19th century enterprise. 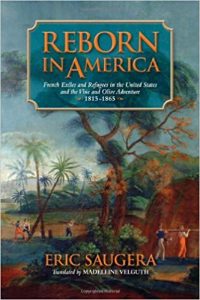 Reborn in America: French Exiles and Refugees in the United States and the Vine and Olive Adventure, 1815-1865 (Atlantic Crossings)

The history of the Vine and Olive Colony in Demopolis, Alabama, has long been clouded by romantic myths. The notion that it was a doomed attempt by Napoleonic exiles in America to plant a wine- and olive-growing community in Alabama based on the ideals of the French Revolution, has long been bolstered by the images that have been proliferated in the popular imagination of French ladies (in Josephine-style gowns) and gentlemen (in officer’s full dress uniforms) lounging in the breeze on the bluffs overlooking the Tombigbee River while sturdy French peasants plowed the rich soil of the Black Belt. Indeed, these picturesque images come close to matching the dreams that many of the exiles themselves entertained upon arrival.

But Eric Saugera’s recent scholarship does much to complicate the story. Based on a rich cache of letters by settlement founders and promoters discovered in French regional archives, Reborn in America humanizes the refugees, who turn out to have been as interested in profiteering as they were in social engineering and who dallied with schemes to restore the Bonapartes and return gloriously to their homeland.

The details presented in this story add a great deal to what we know of antebellum Alabama and international intrigues in the decades after Napoleon’s defeat, and shed light as well on the other, less glamorous refugees: planters fleeing from the revolution in Haiti, whose interest was much more purely agricultural and whose lasting influence on the region was far more durable.