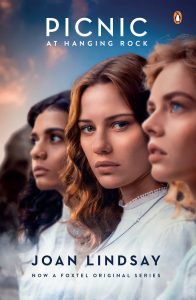 I was sent this novel by a longtime Australian friend who became interested in the television show featuring actress Natalie Dormer.

“Picnic at Hanging Rock is an Australian historical fiction novel by Joan Lindsay. Set in 1900, it is about a group of female students at an Australian girls’ boarding school who vanish at Hanging Rock while on a Valentine’s Day picnic, and the effects the disappearances have on the school and local community. The novel was first published in 1967 in Australia by Cheshire Publishing and was reprinted by Penguin in 1975. It is widely considered by critics to be one of the best Australian novels.” Wikipedia