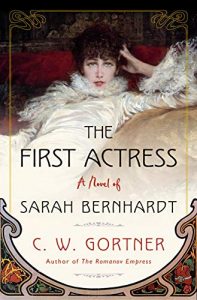 From her beginnings as the daughter of a courtesan to her extraordinary transformation into the most celebrated actress of her era, Sarah Bernhardt is brought to life by an internationally bestselling author praised for his historical novels featuring famous women.

Sarah’s highly dramatic life starts when she returns to Paris after her convent schooling and is confronted by her mother’s demand to follow in the family trade as a courtesan. To escape this fate, Sarah pursues a career onstage at the esteemed Comédie Française, until her rebellious acting style leads to her scandalous dismissal. Only nineteen years old and unemployed, Sarah is forced to submit to her mother’s wishes. But her seductive ease as a courtesan comes to an abrupt end when she discovers she is pregnant. Unwilling to give up her child, Sarah defies social condemnation and is cast adrift, penniless and alone.

With her striking beauty and innovative performances in a bohemian theater, Sarah catapults to unexpected success; suddenly, audiences clamor to see this controversial young actress. But her world is torn asunder by the brutal 1870 Siege of Paris. Sarah refuses to abandon the ravaged city, nursing wounded soldiers and risking her life.

Her return to the Comédie and her tempestuous affair with her leading man plunge Sarah into a fierce quest for independence. Undeterred, she risks everything to become France’s most acclaimed actress, enthralling audiences with her shocking portrayals of female and male characters. Sarah’s daring talent and outrageous London engagement pave her path to world-wide celebrity, with sold-out tours in Europe and America.

Told in her own voice, this is Sarah Bernhardt’s incandescent story–a fascinating, intimate account of a woman whose unrivalled talent and indomitable spirit has enshrined her in history as the Divine Sarah.