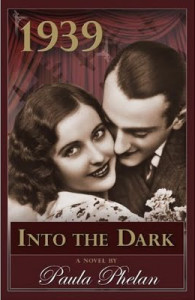 I accepted this book for review with some trepidation, as I do with all books that aren’t in my particular favored eras (Medieval through Victorian), not because I doubt their worth; because I don’t have a lot of knowledge and experience to put into a review. I don’t know why I am so repelled by WWII history – perhaps aversion set in early from reading Anne Frank: Diary of a Young Girl when I was young. In any case, I usually stay away from fiction based in the early 20th century, but I chose to read this simply because it sounded so interesting and a bit glamorous being set around artists of all backgrounds in New York City.

There are quite a few characters in this novel, and they are mostly introduced together in the first few pages of the book. I have to admit – I was quite confused for a while with so many names to remember and personalities to decipher. But once you get comfortable with them, most have a charming quality or at least lead an interesting life, and you begin to look forward to learning more about each one. There is a character list in the front of the book to refer to, which I would recommend reading through before you start the novel.

Though you only spend a small amount of time with each person, there is such depth to the characters that they all make sense as to their status, lifestyle and personality. Even though they are all multi-talented and good looking, it doesn’t seem silly in this story because they are famous for these very reasons.

But glamour is not the underlying message here. The war has begun in Europe, though it is not widely known in America just how bad things are across the sea. A reporter writes snippets of information that are eye-opening and horrifying. Most of these tidbits are the little known things that happened to the Jews before their captivity and the smaller countries surrounding Germany, which precipitated WWII.

Famous names are thrown around — such as Georgia O’Keefe, Ayn Rand, Katharine Hepburn and many more — which gives a panoramic view into the culture of NYC during that time. One of the most fascinating events described is the World’s Fair. I’ve heard of it before, vaguely, and it was interesting to find the underlying political schemes associated with it. You can find actual video footage of the 1939 World’s Fair on YouTube.

This book is the middle of a trilogy, but as the characters are different for each one, you don’t need to read them in order. Her first book is 1919 Misfortune’s End, and the upcoming third novel is 1969 The Dream of Aquarius. These are very important years in American history and Paula Phelan puts characters and facts together to make fascinating and unforgettable stories.