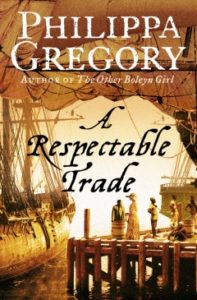 A Respectable Trade
by Philippa Gregory

Frances Scott, aging society lady, marries a wealthy merchant, Josiah Cole, who is in the business of trading sugar, coffee and slaves in Bristol. Shortly after their marriage the first set of slaves arrives, and Frances is given the task of teaching them to speak English and work as servants. She forms a bond with Mahuru, who was something of a medicine man in his native country and very intelligent. They begin an affair as Josiah gets himself deeper and deeper into debt with the Merchant Venturers. Finally events spiral down to a tangled but satisfying conclusion, all the while insinuating the class structure changes the world will shortly witness with the French Revolution.

I read the audio version, which turned out to be abridged (3 full CDs) but somehow still conveys the essence of the book, and the narrator is fabulous. It’s a nice step away from Gregory’s royalty books, and well worth a read.