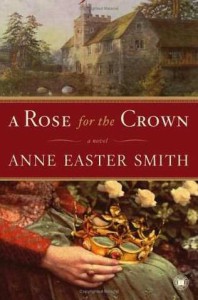 A Rose for the Crown

It’s difficult to write a synopsis for this book because it is long and the main character’s situation changes many times. Kate began a poor farmer’s daughter, spent her early years as ward to a wealthy cousin, was wife to two very different men, and finally mistress to Richard of Gloucester, later known as Richard III. I believe that is as short and vague as I can make it; the rest of this review will be more detailed and contains spoilers.

I wasn’t overly impressed with Kate in the beginning. Of course, her peasant speech had much to do with it, and she lost it fairly quickly when she moved to Ightham Mote. The time she spent at the Mote seemed to really build her character and by the time she married her first husband, Thomas Draper, she was quite an interesting protagonist.

Of all the personalities in this novel, George is the most puzzling. When he went to the Mote to woo Anne, he found her father not inclined to allow her to marry a second son. And so he turned his attentions to the more physically desirable Kate, who had not a penny to her name. Why would he do this if he preferred men? Of course, his intentions after the death of her first husband are clear — she was a rich widow and he had much to gain. And so they married, but he refused to do his duty. Shortly after she found out why and wanted desperately to end their marriage, but George did not want to give up his new found wealth and admiration his family had of his new wife. And so he suggested that Kate have a liaison on the side as well, so that she could not complain of his infidelities. She was horrified and went to a lawyer seeking advice. Shortly afterward Richard enters her life and she becomes pregnant. George is extremely upset and angered that she ‘cuckolded’ him. But he is the one who initially suggested it, so why the jealousy? That is what I don’t understand about George – he is not consistent.

If you read the book description, it is mostly about Richard. He is the main historical figure and the events surrounding him, the Wars of the Roses, are the backbone of this story. However, it does take an incredibly long time for his relationship with Kate to begin, and once it did it went too quickly. I don’t think they had enough time to get to know each other enough to have such a deep love for one another. I believe I had the exact same complaint with this author’s other book, Daughter of York. The lovers need more quality time together!

I think the author knows her history and is very good at describing the scenes and details of the era. I’m very impressed with her knowledge of place, status, customs, etc. Her characters seem real, only they need more time to build their relationships.

This book includes a genealogy chart for the Plantagenet houses, list of characters (there are many to remember), a map of England during the late fifteenth century, an author’s note, glossary, reading group guide and Q&A with the author.