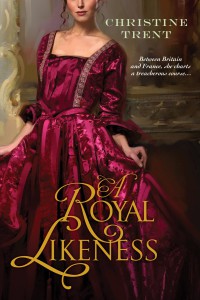 England, 1803. The French Revolution has ended, but Napoleon Bonaparte is on the move and snapping up pieces of the continent for his empire. England feels threatened and, with much anti-French sentiment, is gearing up for war. Such is the setting for this intriguing novel on a most interesting lady: Madame Tussaud, maker of famous wax figures, who brings her collection to England in hopes of reviving her fortunes.

Dollmaker by trade, Marguerite Ashby embraces a change of profession after a horrific incident leaves her with little to live for. As Madame Tussaud’s apprentice, Marguerite learns to create lifelike wax figures of famous and infamous people from both the past and present. The most realistic are made from life masks or death masks, moldings taken of actual features during the person’s lifetime, or shortly after his or her death.

Despite the artistic nature of waxworks, the figures are not only for entertainment purposes–soon the government realizes a strategic use for the replicas, and thus entangles Marguerite in undesirable political machinations. Horatio Nelson and the Battle of Trafalgar are included in the narrative, as well as other important men of the era, such as William Pitt and Charles James Fox. I believe the ‘Royal’ in the title mostly alludes to past royalty, not King George III or his family.

This is another interesting depiction of women in a specialty craft and I believe the author has a talent for making the implausible plausible. After reading the Author’s Notes and reading up on Madame Tussaud, I am surprised at all the info and events that are indeed based on fact.

Even though it is a sizable book, it reads quickly and is interesting from start to finish. There were no places in the book that were sluggish and I found myself reading more quickly (or attempting to) because I wanted to find out what happened next.

I felt that Marguerite had too many suitors and no common sense when it came to understanding the men or herself. There was a thin layer of psychological analysis to the characters, but not quite enough to understand them all thoroughly. Even so, it is a very engaging read and I recommend it as an excellent addition to the historical fiction lover’s bookshelf!