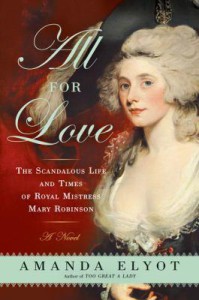 All for Love: The Scandalous Life and Times of Royal Mistress Mary Robinson

Actress, poetess, novelist, essayist, playwright — Mrs. Mary Robinson was all of these as well as a devoted wife and mother, until her husband at last severed all her affection with his licentious, degrading behavior. Though she was immensely intelligent she made rather bad choices when it came to matters of the heart, although in some cases she didn’t have very many options open to her.

She was referred to as ‘the Perdita’, the role she played when first admired by the Prince of Wales. ‘All for Love’ is another play she starred in. Mary is quite a heroine, kind and true to her friends, but with one distinct flaw — her devotion to men who treat her badly, though through these experiences she gained the knowledge needed to pen her many great works.

This is one of my favorite historical novels, as it introduced me to 18th Century England with style and wit! I’m impressed by the author’s vocabulary and prose, as well as her knowledge of the politics and society of the era. I’ve since read many novels depicting these characters and still count this one as a very memorable and enjoyable read.