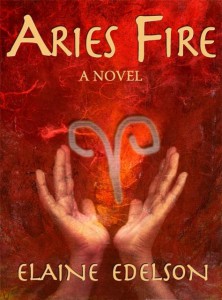 Aries Fire: Signs of the Times

In the year 415 AD, Hypatia of Alexandra–the legendary Neoplatonist philosopher and instructor of astronomy and mathematics–is brutally murdered by Christian monks. This horrific act sends her 17-year-old daughter, Seira, on the run from her attackers and, more pressingly, their leaders. Cyril, the Patriarch of Alexandria and the future Pope Leo I each had an agenda where Seira is concerned, which plays out later in the story.

She first finds herself on a merchant ship bound for Cyprus, but escapes and spends the next few years training with her mother’s friends and mentors, learning how to control her abilities and use them to advantage. Ultimately she ends up a prisoner of the Huns, where she is respected for her medicinal abilities, but remains a possible bargaining chip to the Christian leaders in Jerusalem and Alexandria. Throughout her travails, she learns much about life, people and difficult situations. Though she is intuitive and studies astrology, she finds she must curb her temperament and desires in order to mature into the woman she was meant to be.

Seira is a difficult character to define. At seventeen she is prideful and obstinate, with strong passions and rash actions. Later, in her mid-twenties, she mellows out but discovers a brutal side to her nature that troubles her conscience, though she focuses on the good she can bring about, with her companion–Attila–who shows great leadership, steadfastness, patience and wisdom at a young age. By her thirties she has almost let go of the past when it comes back full circle to challenge her.

This is a good coming of age novel with both notable and charming characters. I wasn’t taken with Seira at first, but understand that she had to be presented as a true Aries to fit the story and the series. Once used to her personality, the writing style and plot development, it becomes a fast paced thriller. The setting–new to this reader–is an interesting era with major changes in religion taking place.

Aries Fire is available as an eBook at Amazon.com – and is the first in a series of novels (Signs of the Times) based on characters true to their astrological sign and set in various locations and eras.