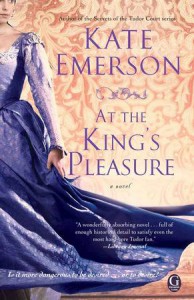 At the King’s Pleasure

Anne Stafford, Lady Hastings, is one of the many familiar names to readers of Tudor fiction. Most know her as one of Henry VIII’s early conquests, though the details of their liaison have been sketchy—until now.
We follow Anne from the time between her marriages, when she was under the control of her brother, the Duke of Buckingham, until just after the Field of Cloth of Gold.

Her second marriage starts out badly when the king sets his eyes on her, sending one of his gentlemen to woo her. William Compton himself has fallen for Anne, though she only has eyes for her husband—at first. Regardless, she is whisked away from court by her brother who will not allow a Tudor to take a Stafford lady as mistress.

Innocent, yet stuck in a miserable convent, Anne decides if it’s ever in her power, she will be revenged on the proud duke—and eventually he is the one in disgrace.

Everything expected of a Tudor read—pageantry, intrigue, treachery and revenge—this is just one of the exciting Tudor books from Kate Emerson’s series. Filled with amazingly accurate period detail and fully fleshed out characters, this is definitely a treat for Tudor fans!