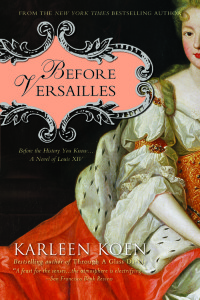 Louis XIV is a young king on the cusp of power when Cardinal Mazarin dies, leaving the realm in the hands of Nicholas Fouquet and other trusted ministers. Louis was changing from inexperienced and naive to a man his musketeers deemed a worthy king. We see his fumbled attempts at courting his brother’s wife and the resulting mess, as well as his budding love for Louise de La Valliere. This is not a love story of either women, but an intriguing version of events from many points of view, most importantly Louis’s. It’s also a mystery, as there are two series of events that present several possible culprits which are revealed later in the book. These conspiracies were new to me, but factual as discussed in the Author’s Note. This is definitely an era I need to brush up on!

Because only four months are covered, we have the chance to see the change in Louis and the events that inspired him to become the great Sun King he would make legend. I was very impressed with the character building as well as the descriptions of the palaces, the courtiers and life at court.

Having read and loved Through a Glass Darkly, Now Face to Face and Dark Angels, I was ready to devour this book, but the beginning didn’t pull me in entirely. I’ve read a few other fictional accounts of these characters, most notably Jean Plaidy’s The Wandering Prince, which details the life of Madame (Henriette). First impressions are lasting and it took a while to accept that Henriette was not the serious minded victim of her husband and his unnatural tastes. And I’ve read another version of Louis and Louise, which was very different as well.

However, all previous reading experiences aside, this is a wonderfully engaging novel! After getting to know Koen’s characters I decided I like them, and went through a few torturous days at work wishing I was home reading! This is one of those books you cannot put down and must stay up late to read!