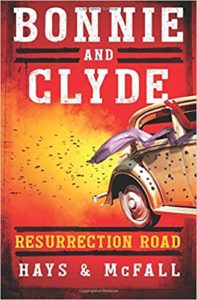 Bonnie and Clyde: Resurrection Road
by Hays and McFall

What if Bonnie and Clyde didn’t meet their end in 1934 as the newspapers reported? This imaginative alternate account of the story extends their tale to a round of further adventures in which the notorious lovers receive a sort of redemption of their past deeds. They’ve been forcefully recruited by a mysterious government official of dubious credentials, and have been entrusted with a dangerous and seemingly impossible task–tracking down and eliminating an assassin aimed at the White House. From the dusty roads of small-town USA to glittery New York City, Bonnie and Clyde take on various personas, blustering their way through schemes conjured up in a pinch. Their own fate, that of their family, and even the entire nation lies in their hands as they tackle this harrowing assignment with street-smart precision and sometimes bungled good luck.

This story is told by an elderly Bonnie who has just laid Clyde to rest under the name Clarence Prentiss. She has summoned Royce, a local newspaper writer looking for a breaking story, and is ready for the world to know the truth–well, almost ready. First there is some unfinished business to attend to, and meanwhile Royce must do some clue-hunting and fact-checking. How will the world react when it’s revealed that part of the famous duo yet lives–someone who has a cult following, but is still perceived a thief and murderess?

The state of the nation during the Great Depression is one of the central themes of the story. It lends reasoning to Bonnie and Clyde’s crime spree, although through their multi-state journey they meet people of many walks of life, which offers a different perspective of the bigger picture. Reluctantly, the infamous couple prove to be witty and almost admirable protagonists, most notably as they attempt to reconcile with their past. Though there is ample closure, the ending is left open, which hints that this absorbing tale will likely have an eagerly anticipated sequel.