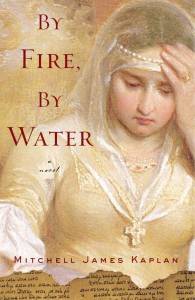 By Fire, By Water

15th century Spain is an era I am not very familiar with, having only read novels mentioning Isabella of Castile and Ferdinand of Aragon. The Spanish Inquisition and the fate of both the Muslims and the Jewish communities during this time period is a subject I’ve planned to read more about (Jean Plaidy wrote 3 non-fiction volumes on the Spanish Inquisition, as well as several novels), but I’ve found that Mitchell James Kaplan’s By Fire, By Water is a very good introduction to the three major religions of the region: Christianity, Judaism and Islam.

Meticulously researched and with a superb vocabulary it is a story of a people, conversos, searching for their history and the answers to many questions about their birthright, no matter the consequences. Spain, which at the time was made up of the kingdoms of Castile and Aragon, was predominantly Christian and with the Inquisitor General, Torquemada, on the rise a dangerous place for the Jewish population. Though they had safety among the Muslims, as Ferdinand and Isabella take the cities one by one they find themselves persecuted or banished entirely.

The main character, Luis de Santangel, began in the story both Christian and an important figure in the court of Aragon—that of Chancellor. Though he was aware that his ancestors were Jewish, he had never practiced the religion or thought much of it until a man was presented to him to pay the community contribution. Santangel’s interest was piqued when he found the man knew of his Jewish relatives and could decipher some ancient texts left in his care by Christopher Columbus. They, along with a few other conversos, began secret meetings that eventually led to not only Santangel’s downfall, but the imprisonment or death of many others.

I had imagined the title—By Fire, By Water—as methods of torture by the Inquisition, however it turned out to be a phrase from an ancient Hebrew text. In fact, I learned quite a lot about Judaism from this novel and it is very literary in nature (not a light read), which will appeal to the more scholarly readers. Historical fiction lovers will enjoy it for the numerous historical personas as well as descriptions of life in medieval Spain.

Christopher Columbus, or Cristobal Colon, does play a role in the book—and an important one toward the end—but the story is not focused on him. The major themes are: the expulsion of the Jews from Ferdinand and Isabella’s realms, the wild, fanatical views of Tomas de Torquemada and a burdened people who nonetheless follow their beliefs to exile and death.