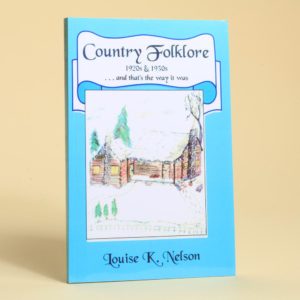 This gem of a book offers invaluable resources for writers of the Depression Era in the rural areas of the South. Because the author lived through the times, the information is firsthand and authentic, if somewhat simplistic. The repetitive nature of the writing is due to the fact that it’s a collection of articles from various publications, put together to form a book. Even so, it’s a quick enjoyable read with much insight into the lifestyle of the amazingly resilient people who lived in a remote cove in western North Carolina.

This book covers every aspect of farm life, from the endless daily routine of producing, tending, gathering, and preparing food, the making and caring for clothes, and the hardships of limited transportation and being at the mercy of the elements. Social events, other than church when one could walk the 8 mile round trip, were mainly based around the harvest as neighbors helped one another with collecting and canning.

However, it’s not at all a depressing read. The author describes the joy she found in each season, time spent with her many family members, and various events that happened in her young life. Of special interest is the blizzard of 1936, the first automobiles in the area, and plethora of games the children played to pass time when they were free of their chores. There are dozens of photographs throughout the book, giving a visual of many of the farm instruments described in the text.