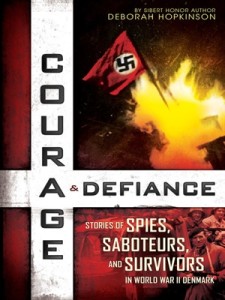 “Only a drop in the ocean, that’s what they say. Well now, the ocean consists of drops.” – Mogens Fog

An emotionally affecting story based on a collection of survivors’ memoirs, this WWII account focuses on the resistance efforts in Denmark during the five years of German occupation. Readers are immediately drawn in with riveting action from the Danish spies and saboteurs—ordinary men and women who, instead of meekly surrendering their freedom and watching their fellow countrymen in danger, chose to covertly help the official resistance organizations by destroying German machinery and weaponry, disrupting their supply lines and secretly transporting the Jewish population to nearby neutral Sweden. At a great risk to their own lives—and in fact many of the Danes featured were eventually sent to concentration camps—these men and women were brave, admirable heroes of WWII and humbly represent the spirit of the Danish people in a time of great deprivation and strife.

Courage & Defiance easily garners interest in its subject, giving supporting information on the causes of the war succinctly, and age appropriate descriptions of Hitler’s rise without overwhelming details. Headings include a date, relevant quote or newspaper headline, and there are captioned photos throughout. A vocabulary list for young readers is included, as well as a prologue that is both informative and personal while anticipating any qualms readers may have, such as the timeline that skips around.

The author’s enthusiasm for these brave men and women shines with each new chapter, encouraging readers to further independent research. While recommended for ages 8 -12 years, it is suitable for both young adults and older readers as an indispensable reference for those interested specifically in the history of Denmark during World War II.