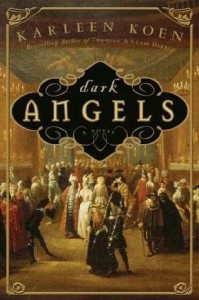 When her affianced suddenly married one of her closest friends, lady-in-waiting Alice Verney traveled to France to serve Charles II’s sister, Henriette–married toMonsieur, Louis XIV’s brother, and known asMadame in the French court. Leaving Queen Catherine and her homeland, she found great consolation in waiting upon her new mistress, but even this was soon to come to an end. A plot centered on the mysterious death of Madamebecame a further threat when Henri Ange, a dangerous man from Monsieur’s household, showed up in England skulking around the Queen’s household. Alice, along with the Queen’s Captain of the Guard, Richard Saylor, began searching for the man they believed poisoned Princess Henriette.

The Duke of Buckingham, having ties with Ange, and with a plan to replace Queen Catherine with a Protestant who would give King Charles heirs, was believed to have employed the suspected poisoner. Buckingham’s nemesis, the Duke of Balmoral, held much power and sway with the King as one of the last great men of the older generation. Though he wanted Protestant heirs from the King, he would not allow the Queen to be ridded of by way of poison—his final goal, as his health was rapidly declining, was to find Henri Ange and gather information to ruin the Duke of Buckingham.

Meanwhile, Richard is courting Renee de Kerouille, who had also caught the eye of the King. Alice revengefully sets out to marry the Duke of Balmoral—uncle to the man who previously jilted her. If you’ve read Karleen Koen’s historical saga, Through a Glass Darkly and Now Face to Face, you will know that eventually Alice and Richard marry. This is the story of how they came together and a coming of age tale for Alice, as she was not the wise and admirable matriarch she portrayed in the later novels.

Though I wasn’t taken with this novel when I first read it in 2006, I have since decided–with much more experience in the genre–the author’s elegant prose and detailed characterizations are just as prevalent in this novel as the later saga. I’d even suggest reading this prequel (which was published after TAGD and NFTF) first to get a feel of the era and roots of the characters. I can now appreciate the naming of Alice’s granddaughter (Barbara) and her attachment to Tamworth, with some characters making an interesting appearance in the much earlier set story. The audio version has a pleasant narration and the abridgment is barely perceptible.