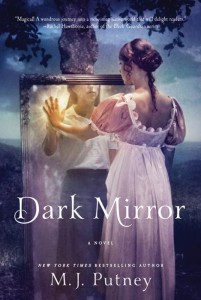 Victoria ‘Tory’ Mansfield is a gentleman’s daughter in the year 1803. Through an act of bravery she exposes the fact that she has magical powers to the genteel society and finds herself shipped off to Lackland Abbey, where young ‘mages’ are sent to cure them of their unsavory nature. Though the common people of the era find magic useful, the Lords and Ladies maintain that it’s vulgar and thus ostracize anyone claiming the gift.

Tory only wants to be cured and return home, but soon realizes the usefulness and her own growing desire of her magical powers. She also finds that she’s not alone–not all the mages of Lackland have the same goal. With the growing threat of war on the horizon, Tory decides that the comfort of her old life may not be as important as keeping war from coming to England’s shores.

There is an underlying theme here: the similarities between Napoleon and Hilter, and also the disintegrating of the class structure from one century to the next.

For the history lovers, there are good descriptions of both Regency and WWII England. You get to see a more modern world–cars, planes, trains, plumbing, electricity–through the amazed eyes of a girl used to candles and horse-and-buggy.

Time travel and young adult are not among my usual reads, but I am glad to have chosen this one. It’s surprisingly sizable with engaging characters and a story that keeps you moving from start to finish. I didn’t get bored or feel stuck at any point in the book (which is rare for me, with all the interruptions I endure). This book was a pleasure to read, and I’m anticipating the next in the series: Dark Passage!