History tells us that the intelligent, wealthy, and powerful Margaret of York had everything any woman could want, except for love. The acclaimed author of A Rose for the Crown takes us between the lines of history and into her heart.

It is 1461: Edward, son of Richard of York, ascends to the throne, and his willful sister, Margaret, immediately becomes a pawn in European politics as Edward negotiates her marriage. The young Margaret falls deeply in love with Anthony Woodville, the married brother of Edward’s queen, Elizabeth. But Edward has arranged for his sister to wed Charles, son of the Duke of Burgundy, and soon Margaret is setting sail for her new life. Her official escort: Anthony Woodville.

Margaret of York eventually commanded the respect and admiration of much of Europe, but it appears to history that she had no emotional intimate. Anne Easter Smith’s rare gift for storytelling and her extensive research reveal the love that burned at the center of Margaret’s life, adding a new dimension to the story of one of the fifteenth century’s most powerful women. 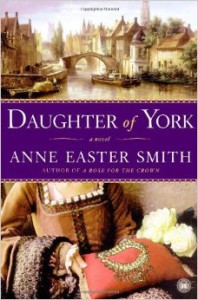 This is the story of Plantagenet princess Margaret of York, who marries into the duchy of Burgundy during its final successful rule under Charles the Rash. Though she always puts duty first, her true passion lies with Anthony Woodville, the brother of Queen Elizabeth, whom she sees none too often once she crosses the channel. I believe it is a great love story to some, but I found this specific element of the book wanting. I can’t imagine anyone living so many years apart, with little or no correspondence, and maintain such a passion. However the characters and settings are described immaculately and the political intrigue is very interesting. There is much information about the complicated campaigns and maneuvering of three major powers during the late fifteenth century that would please those, like myself, who enjoy a little history lesson with their novel.