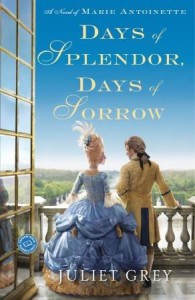 Days of Splendor, Days of Sorrow

Juliet Grey, along with Amanda Elyot, is a pen name belonging to the lovely and talented Leslie Carroll—one of my favorite historical novelists. Having read seven of her books thus far, fiction and non-fiction, I much enjoy her smart writing style and her ability to write a perfectly balanced and intriguing story. All for Love, a fictional biography on the 18th century actress, Mary Robinson, remains one of my favorites, while this new trilogy on Marie Antoinette has been added to the list.

Days of Splendor, Days of Sorrow is the middle book of a trilogy based on the life of Marie Antoinette. While the first installment, Becoming Marie Antoinette, explores the early life and four-year period during which she was dauphine, Days of Splendor delves into the many events and misunderstandings that led to the Queen’s undoing and the French Revolution. Marie Antoinette’s distaste for strict etiquette and lack of privacy, her snubbing of the old regime and seclusion at Petite Trianon created ripples among the nobility, which trickled down to commoners, maligning the Queen undeservedly.

While she waited (quite patiently) for her husband to undergo the surgery necessary for the couple to consummate their marriage, she had no outlet other than decorating her apartments, creating magnificent dresses and coiffures and hosting card parties and masked dances–as her husband barred her from all state matters. While she yearned for children and a more rustic existence, she gained many enemies to add to those who simply held her contemptible for being Austrian. By the time the heir was born, eleven years after her political marriage, her reputation was tarnished beyond repair, and the Revolution–sparked by the Americans–was quickly materializing.

This middle volume of the trilogy goes into the year 1789, just after the storming of the Bastille. The heartbreaking and bloody final years of the life of Marie Antoinette will be chronicled in Juliet Grey’s final novel, titled The Last October Sky, due to publish in 2013. This reader is very excited for the finale, though it is sure to be a heart rending story, knowing the Queen’s horrific fate.

After you devour Juliet Grey’s first two novels, other suggested reading is The Queen’s Confession by Victoria Holt, a fictional biography of the life of Marie Antoinette, The Queen of Diamonds by Jean Plaidy, which chronicles the theft ring behind the stolen necklace that helped bring scandal to the monarchy, Annette Vallon by James Tipton, the French Revolution through the eyes of the lower classes, and Madame Tussaud by Michelle Moran, the famous waxmaker during her early years as she lived through the Terror.