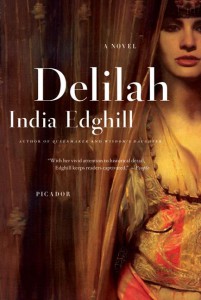 When I was 8 years old I received an illustrated Bible from my aunt for Christmas. Though I no longer have it, I can remember the pictures that were scattered throughout. One featured a muscular, bloodied Samson pushing great pillars. I can’t recall ever learning more about the story–until now.

I’m not sure what I expected when I began this novel–surely nothing veering from the Christian tale, but I was very intrigued to find differing religions, gods and goddesses depicted without preference to any certain one. If there’s one thing that turns me off from a novel it’s having an agenda, especially of a religious nature. You won’t find that issue with Delilah.

The setting is Biblical era Canaan (the area between the Mediterranean Sea and the Jordan River) which contained the ruling Five Cities: Gath, Ekron, Ashdod, Gaza and Ascalon, Pearl of the Five Cities. Ruled by the Philistines, but coveted by the Hebrew–this is the great love of story of Samson and Delilah. As the author says in her notes, there is barely a word in the Bible about the woman who brought Samson down, which makes for an interesting historical novel. Much can be imagined and created about a woman who had the power to bring down the legendary strongest man in the world.

Not surprisingly, there was discontent between the Philistines, who worshiped various gods and goddesses, and the Hebrew, who worshiped only Yahweh (the Christian God of the Old Testament). A certain clan of Hebrew had chosen Samson as their leader because of his stature and God-like appearance–he was said to have been sent by angels or fathered by gods, depending on whom you asked. That Samson did not wish for anything other than a peaceful existence mattered not at all to “Samson’s Foxes” as they styled themselves. They committed many violent acts in his name, making the Philistines believe that he was actually behind it and, in fact, wanted to be king over their people and lands.

Thus set the stage for war. Perhaps Samson could have eventually made peace between the warring factions had he not spied Delilah dancing in a festival and had to have her as his wife, angering the Philistines further. In this story Delilah is a dancer priestess of the Temple of Atargatis, Sea Goddess of Love and in high favor of the head priestess–a valuable asset to the Temple, bringing in riches from wealthy men. To lose her to the enemy was unthinkable, and so a plan is set forth for a trap…

This is a beautifully written tale between several narrators: Orev, harper and loyal friend of Samson; Aylah, heart-sister and fellow dancer to Delilah; Derceto, head priestess of Atargatis; Sandarin, the Prince of the City; and, of course, Samson and Delilah. This may seem confusing, but events unfold seamlessly and orderly because of these points-of-view. My favorite characters are Orev for his humor and Aylah for her cynical wisdom. This is a must-read for Biblical fiction enthusiasts and a wonderful pick for historical fiction readers as well.