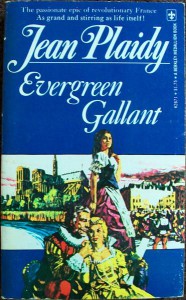 There are three major themes to this novel: Catholics versus Huguenots, the succession of the French throne and Henri IV’s amorous ways.

One of the reasons I really liked this book is that it aptly sums up a period in France’s history that was previously unknown to me. I’ve read up to Henri II and then skipped all the way to Louis XIV, so it was refreshing to read a new setting and characters. And Plaidy does wonderfully explaining all of the political intrigue as well as the characters and their relationships. This book covers two of Henri II and Catherine de’ Medici’s sons as Kings of France, Henri de Guise (a rival for the throne) and Henri Quatre.

The religious theme is the usual — Catholics against the reformed religion — though includes the horrific St. Bartholomew’s Day Massacre. Paris is Catholic, Navarre is Huguenot and so Henri must make a choice when his time comes to be King of France. He is well known for saying ‘Paris is worth a mass’ and winning the adoration of the people. He was a good king, helping commerce and making sure all of his subjects ‘have a chicken in the pot every Sunday’. He did not wear expensive clothes or jewels, nor did he have the manners of a court gallant.

Henri’s biggest fault was his amorous ways. From a very early age he liked the women and each one he declared his true love. He made the mistake of promising marriage to many of them and later he would regret this, as some of his mistresses worked relentlessly to have their children legitimized. Honestly it was difficult to keep up with all of his ladies in the book. After the first 5 or 6 it’s hard to remember who was who, though the last two were perhaps the most important to the storyline.