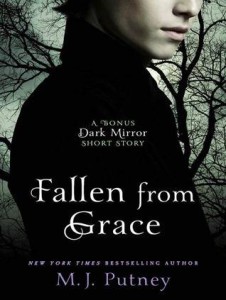 This short story is a companion to the author’s full-length young adult novel Dark Mirror, which I previously read and reviewed. While it is very short, it does give some insight into one of the murkier character’s background–though not an astonishing series of revelations. Allarde is standoffish in Dark Mirror and is also hiding a dark secret. While Fallen from Grace does not reveal his secret, it mentions his uneasiness with what he sees as a premonition for what’s to come. His public ‘outting’ as a mage is similar to Tory’s, which was fairly predictable and his joining the Irregulars and embracing his magic could have been more detailed. Overall I think his character could have been expanded on, but it was an enjoyable addition to the novel.