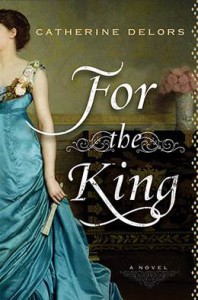 After the French Revolution, when families were picking up the pieces of their scattered lives—loved ones dead, fled abroad or hiding from the new regime—two factions against Napoleon Bonaparte were actively plotting attacks and assassinations. The Chouans were royalists and wished to restore the monarchy, while the Jacobins were revolutionaries who did not support Napoleon as First Consul (and later as Emperor). For the King retells the infamous case of the Rue Saint-Nicaise bombing that narrowly missed its intended target, and the search for the culprits guilty of the gruesome crime that killed or maimed many innocent people.

Our hero, Roch Miquel, Citizen Chief Inspector, is not politically aggressive or religiously fanatical, and follows the law as an honorable person in his position should. But when his father, Old Miquel, is jailed for a few carelessly spoken words—and may even face the guillotine—Roch must use all of his resources to bring about the arrest of the men responsible for the crime. Along the way he finds that his superiors are not averse to corruption, friends are fallible, and love is not always what it seems. It is in fact a race against time when a date is set for Old Miquel’s release or demise.

This novel definitely has a mystery feel, though I’d still label it as historical fiction (rather than historical mystery) because we, the readers, meet the foes early on and know more of the truth than the protagonist throughout the story. The manner in which Roch finds the truth and plans his investigation is the interesting aspect and I found the story fascinating, from descriptions of post-revolutionary Paris to the new way of life of its people.

Like Annette Vallon by James Tipton (one of my favorite French Revolution novels) For the King describes the fate of the lower classes and the fallen aristocrats, the new social statuses and how France pieced together its shattered populace into a republic when so many could not forget—and continued to support—the monarchy. The divided, pretended or secret loyalties to the claims on France’s early 19th century government, and finding out who is in each camp is the main theme to this engrossing tale. French history lovers, mystery readers and even those new to the Napoleonic era will love this book!