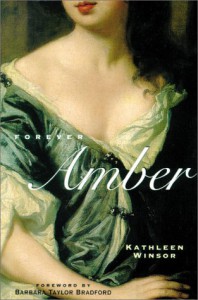 Forever Amber is a staple of classic historical fiction, along with Katherine by Anya Seton, Rebecca by Daphne du Maurier and Gone with the Wind by Margaret Mitchell—yet is set apart by its brow-raising protagonist. While Amber was not by any means a great, admirable woman, the background of this story and its amazingly accurate and eye opening historical details of the lives of every class – from the beggar in the street to the King himself — were poignant, true to form and mesmerizing. It is the best work of fiction I’ve ever read covering the rank in society of 17th Century England.

Amber went through every dirty and glamorous occupation open to women of the age, including country maiden, prisoner, actress, mistress, wife, Lady, Countess, and Duchess. I think the only position she never held was waiting lady or shop girl, though there are plenty of descriptions of them throughout the book.

There are so many astonishing plots and schemes that it almost makes you believe there wasn’t a single honest person in Restoration England. Early in the book the story intertwines Amber and what is happening in the court of Charles II, but she doesn’t make it to that society until much later. These parts were not as intriguing to me as Amber’s life because I already know what was going on with the king, his mistresses and courtiers. But, those who are not familiar with Charles II will no doubt enjoy those parts of the book. I did, however, laugh out loud at some of the antics of my Lady Castlemaine and the Duke of Buckingham. It’s almost impossible to read of these two without finding humor.

There are descriptions of fops, ladies of quality, husband and wives (and their fashionable dislike of one another), highwaymen and the undercurrents of the criminal side of London, country Lords, merchants, peddlers and unfortunate old maids with no occupation but tending the sick poor.

We follow Amber through her triumph at the King’s Theater, the Plague and Great Fire and through several disastrous marriages and assignations. Through it all she saves her love for one man –Bruce – who slips in and out of her life always leaving her desperate with longing.

I was never quite a fan of Amber – she was selfish and completely ridiculous at times, especially when it came to Bruce. She never had great feeling for her children and it seemed her world revolved around frivolity and her perpetual pursuit of ‘the one man she couldn’t have’, but there were parts in the story where all of that was stripped away and you get to see real courage. This is especially prevalent during the Plague and her most unfortunate marriage.

Bruce I found to be completely self-serving. Though common sense ruled him, he had no problem allowing Amber to hurt herself again and again. Had he one ounce of feeling for her, he should have stayed far, far away. He was a disappointment.

The ending seems to cut off abruptly, and I cannot believe there is no published sequel (though one was started by the author) and we are left to wonder what happens. I won’t say more to avoid spoilers. Though I am very piqued with the ending, I have to say that it was worth every page — all 972 of them.