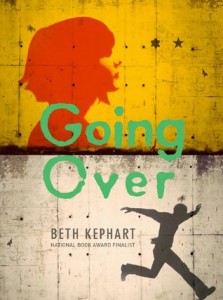 Going Over
by Beth Kephart

Ada Piekarz is a 15-year-old daycare worker by day and graffiti artist by night. She lives in 1980’s Berlin, near the wall that separates the East from the West. She’s on the West side–the free side–while her boyfriend, Stefan, resides with his grandmother on the East side. For as long as she can remember, she and her grandmother, Omi, have been visiting Grossmutter and Stefan every three months using day passes obtained from the government. The women were childhood friends, growing up together during WWII and its aftermath, but separated during the Cold War by the Berlin Wall.

Obsessed with finding a way for Stefan to escape to West Berlin, Ada has been using graffiti as an outlet, ultimately filling 13 panels with anti-East propaganda and visual stories of those who successfully escaped the communist Eastern Bloc. With every visit to Stefan, she urges him to make plans, telling him she won’t wait forever. The story unfolds, relaying bits and pieces from past visits, while Ada deals with other issues at home and at work that include worrying over her fragile mother, and trying to save a young Turkish boy from a precarious situation.

This is a powerful story, especially for those, like me, with little previous knowledge of the Cold War. I grew up during the time–I was 10 when the wall came down–but being an American kid at the time, I don’t remember much more than some headline news that I didn’t understand. Going Over is an eye-opening account, and though it is fictional, it is based on a true story. The author has provided a lengthy list of sources, as well as notes on her own sojourn to Berlin, which inspired this novel.

I’ve spent a fair amount of time looking up information online about the causes and effects of the Cold War, Germany in post WWII and the rise and fall of the Berlin Wall. Even though I used to be a medieval/Tudor period enthusiast, I have found some of the most inspiring and heart-wrenching novels to be of the 20th century. I recommend this book to all young adults, whether seeking historical fiction or a teen love story, and to adults who are looking for something immersive and a little different from the usual historical settings.