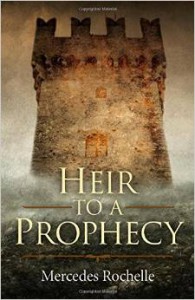 Heir to a Prophecy

Those familiar with Shakespeare’s Macbeth will recognize from this story the characters of Banquo, Fleance and the Three Weird Sisters. While they set the stage, the protagonist throughout most of the narrative is Walter Stewart—beginning with his early life as a Welsh outcast, to his glory days as the King of Scots’ confidante. Malcom III’s defeat over Macbeth, William the Conqueror’s Battle of Hastings and the subsequent uprisings in Northern England are among the action filled pages.

This story is a perfect introduction to 11th century Scotland, England and Wales (and even a bit of Brittany), with minute descriptions of the kingdoms and their people and ways of life. I tend to read and review books with a female protagonist, but had no trouble emphasizing with Walter and his plight. Anyone interested in the events of the 1066 Norman invasion of England will find a detailed account, with particular eloquence regarding battle scenes that even those not inclined to war novels will appreciate. There is a bit of romance, never overly described, and a host of admirable characters. Walter’s transition is the most remarkable facet of the novel, and I would liken him to Elizabeth Chadwick’s William Marshal from The Greatest Knight and The Scarlet Lion. I was also intrigued to meet several characters mentioned in Jean Plaidy’s Norman trilogy.