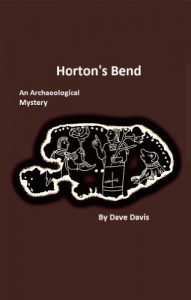 Here’s the first review for my 2021 Reading Goals, which I announced back in November as catching up on my backlog of Kindle books.

I added Horton’s Bend by Dave Davis a few years ago when I came across it searching for Horton’s Bend: George Washington Horton and His Kin by Annette Horton Herrington (a genealogy reference book).

Davis’s Horton’s Bend is a novel labeled as “An Archaeological Mystery”, which is not a prolific subgenre. What intrigued me with this book is that the piece of land in question, around a bend in the Oostanaula River in Rome, Georgia, belonged to a branch of my family several generations back. In fact, I grew up quite near the site and still have family ties in the area.

Unfortunately, there are no author notes to accompany this book, and I haven’t found any solid information on the author. His knowledge of local history, archaeology, and museum politics leads me to believe he has probably worked in the industry. There are a couple of existing reviews on Amazon that give vague negative opinions, however, I generally ignore these if they don’t elaborate. In this instance, I found I didn’t quite agree with them–there is a mixture of pros and cons to my estimation.

In the book’s favor, it is fast-paced and holds interest quite well with introducing characters and building action. There’s not an overabundance of characters to keep up with, and each one seems well-fleshed and believable. The history bits check out with my knowledge of the area and what I know of Hernando de Soto and the Mississippian culture.

However, it is full of grammatical errors and misspellings, which would have been easily avoided by hiring an editor. This is a common affliction of self-published books. Another issue is that the story seemed to be leading up to some grand meaning, but it fell short in the telling. It was overly vague with the reasoning, giving a previously “mysterious” character a long, drawn-out spiel at the end that didn’t really capture what I think the author wanted to convey. Lastly, it was apparent the author is male by the way the women in the story are described. There’s no figure critiquing of the male characters like there are of the females.

If this book were to be expanded upon and placed in the hands of a good editor, it has the potential to be a gem for local and Georgia history readers. I am left wondering if my ancestors’ lands do in fact hold ancient Native American secrets!