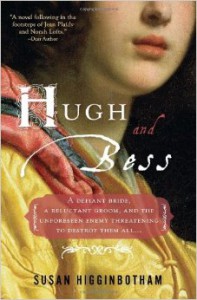 This is a romantic story of the relationship between Hugh le Despenser (son of Hugh le Despenser, 1st Earl of Winchester) and his wife, Bess. After reading so many books in a row lacking chivalrous characters (The Last Queen, My Enemy the Queen, Forever Amber) it was very enjoyable to get to know this Hugh, who was not only a gentleman, but also very funny.

Both Hugh’s father and grandfather were executed by Queen Isabella and her lover, Roger Mortimer. He spent years imprisoned and even more proving his loyalty to the new King Edward III, fighting the Scots and then the French. Bess was not inclined to marry a traitor’s son, but soon began to know him for a good man. She really grows up throughout this novel and shows great courage through the Plague of 1348-1349.

I read The Traitor’s Wife a couple of years ago which is a lengthy and detailed story of Hugh le Despenser (the father of the Hugh from Hugh and Bess) as told through the eyes of his wife, Eleanor. Since I had the history still in the back of my mind I was able to understand more of this new novel, which is almost a continuation, as the writing is so similar.

I didn’t quite like Edward III, but I think he was the closest to an evil antagonist in this story, as well as Joan of Kent. I remember reading of her in The First Princess of Wales by Karen Harper and found the same events in both books, but with slightly different details. Joan was a doomed character from the start in this novel because she marries our protagonist’s brother and soon shows she is not what she seems. In Karen Harper’s book she is the protagonist and so the story revolved more around her plight.

Hugh and Bess is a quick read at 275 pages, but it is fun and, with more modern wording, a nice break from heavy reads with never-ending historical detail – which I love, but sometimes need to step away to freshen my mind with a more simplified read.