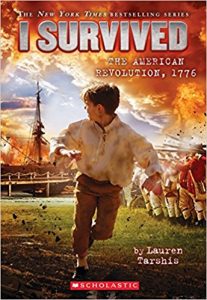 I Survived: The American Revolution, 1776
by Lauren Tarshis

This is an excellent young adult chapter book covering the Battle of Brooklyn during the Revolutionary War. The main character is eleven-year-old Nate, who escaped from an abusive uncle only to find himself in the midst of an army camp. There, however, he reunites with a friend from his sailing days with his late father, and he becomes a camp aide. He meets George Washington and sees many gruesome and terrible things over the course of several months.

One of the first things I noticed is that this story shows young readers bravery through thought and reasoning. When Nate was afraid, he remembered stories his father had told him about a kind pirate, and he rationalized what “Slash O’Shea” would do in his situation. Injustices are discussed, such as the issue of slavery and the effects of the war on ordinary people. There is a good bit of background information at the end that the author has included to discuss research and further reading on the subject.

The “I Survived” series is an interesting and popular set of 15 books starting in AD 79 and ending in 2011. They will interest even reluctant readers with subjects such as the destruction of Pompeii, the Great Chicago Fire, the bombing of Pearl Harbor, and the Joplin tornado. I highly recommend this volume as a great tool for educators teaching about the Revolutionary War, or simply as an exciting and enjoyable read for grades 4 & up.

1 thought on “review: I Survived: The American Revolution, 1776”